When the 'Welcome Stranger' nugget was discovered in 1869 it was the largest gold nugget ever found. It was found by Cornish miner John Deason and his partner, Richard Oates, near Moliagul, in central Victoria. While digging around the roots of a stringybark tree Deason discovered the nugget lying only 3 cm below the surface. The recreation of the event is pictured below, showing the miners and their families with the 'Welcome Stranger'.

The ‘Welcome Stranger’ was taken to the bank at Dunolly, but was so large that it had to be broken on an anvil at the local blacksmith’s before it could fit on the bank's scales. After smelting it yielded 2,302 oz (about 71 kg) of solid gold.
Deason and Oates shared the fortune of nearly £10,000. On today’s gold spot price at AU$86,410 per kg, an equivalent very welcome stranger would be over 6 Million dollars. 1
Later in the post we will have some fun comparing the value in today's terms.

Victoria, the second smallest state in Australia, punched above its weight in the gold nugget department as can be seen below, with 6 of the 7 largest nuggets found in Victoria. The illustration below by Anthony Calvert shows the nuggets size relative to a person, the red cross indicating the "odd one out' from Western Australia"

The volume of gold found in the first few years of the gold rush was staggering – some six million ounces was brought to Melbourne between 1853 and 1857. Soon all the strongrooms were full and, in 1857, a new government treasury building was commissioned to store the gold. The opportunity to design it was given to a talented young government draftsman – nineteen-year-old John James Clark.

The ‘New’ Treasury Building was built between 1857 and 1862. Sturdy vaults were constructed in the basement of the building, with opulent offices for important government officials above. But by the time it was completed, the rate of gold discovery had slowed. We don’t know how much gold was ever stored in the vaults. 1

Did not take long back then, did it, from commissioning to being built!

However, life on the goldfields was far from gold nuggets and riches for most of the diggers as historians estimate less than 10% found enough to make a difference to their lives, and even when they did find gold, it sometimes had a negative effect.

There were other commentators who went even further, suggesting that the average rate to be "five making their fortunes, 45 making good wages, and 50 starving out of every 100." Toward the end of the year, estimates put the proportion of starvelings closer to 90 per cent.2

The diggers contended with disease, lack of fresh water, extremes of weather, and almost no fruit and vegetables. 1851-1853 was called “the damper and mutton stage" of the colony. Wrote one disgruntled digger: “We had to content ourselves with mutton and damper three days a week, and damper and mutton on the other four days.” 2

There are wonderful diarys remaining that document these times, one of note is
is a 223-page diary written by a Scottish gold-digger on the Ballarat goldfields.
The diary was written over a six-month period, during 1855 to 1856. It is closely written in black ink in a ruled cash book bound in black leather. Interestingly, in 2013 UNESCO added this goldfields diaries to the Australian memory of the world register. 3

Today we will be looking at another diary written by an Austrian-born artist who some may know, Eugene von Guérard (1811 – 1901), active in Australia from 1852 until 1882. Eugene was born in Vienna, and studied art in Italy and Dusseldorf before joining the gold rush in Australia in 1852. His self portrait is shown below.

Eugene's diary indicates to me he was quite a gentle person with a sense of humour, yet strong enough to take on seedy characters around the goldfields as he too went in search of gold. Historians believe the diary. The original notes for the diary were written in old German script on the back pages of von Guérard’s sketchbooks. It may have been translated into English by his Australian born daughter, named Victoria (perhaps indicating how much he liked the goldrush state) or her literary husband, Reginald Blunt.4

Extracts from von Guérard's digitised diary span his departure from Gravesend, England on board the Windermere (1852) and the voyage to Melbourne which took over 4 months. It continues with his stay at the Eureka and Ballarat goldfields, then his departure from the goldfields (1854). I found parts of the diary fascinating, as I have lived in a place called Snake Valley, near Ballarat so the location is very familiar. But also, the descriptions of his life in the goldfields, often making light of difficult conditions, the delightful landscapes and many of the characters he came across are brought to life in succinct paragraphs, and make very interesting reading as can be seen below. For those interested, the link is in the footnotes below. 5

January 18th
...The journey has been interesting in many ways. The forests of immense gum trees, the waterholes by which we camped at night, the unpleasant discovery of a scorpion as a bedfellow, the intolerable flies, etc. were all new experiences. ...

The Diary entry for May 7th talks about adding a chimney at the end of the tent and a sketch from the diary showing what it may have looked like. It also succinctly highlights the hazards of the cold weather.

After two unsuccessful years in Ballarat he travelled extensively throughout Australia making many sketches. He later became the first master of painting at the National School of Art, Melbourne and curator of the National Gallery of Victoria. Von Guérard retired from his position at the National Gallery School at the end of 1881 and departed for Europe in January 1882. He later lost his investments in the Australian bank crash and I was saddened to learn that he lived in poverty until his death in Chelsea, London, in 1901.

Now to our quick comparison I mentioned earlier, 71kg gold currently equates to approx $6M Australian dollars. What property does 6 million dollars buy today, compared to £10,00 in 1860? The answer is - not much. The Cornish lads could have purchased about 10,000 acres of land at £1 per acre, or as the Australian Financial Review newspaper highlights that in suburban Brighton, average property values peaked at about £950 in 1888 and then fell to about £400 in 1893 and £300 in 1898, so the lads could have purchased, say, 10 houses.

However, today, the Brighton home shown below recently sold for bang on 6 million dollars! So in today's terms, one home in exchange for the 'Welcome Stranger', would still be very welcome to most of us!

Footnotes
1 oldtreasurybuilding.org.au
2 sbs.com.au
3 Founded in 2000, the UNECSO Australian memory of the world register was the first in the world; now there are more than 60 national Memory of the World programs, and is designed to list documents that have significant documentary heritage.
4 slv.vic.org.au
5 http://archival.sl.nsw.gov.au/Details/archive/110349940
6 wikiart.org
7 realestate.com.au 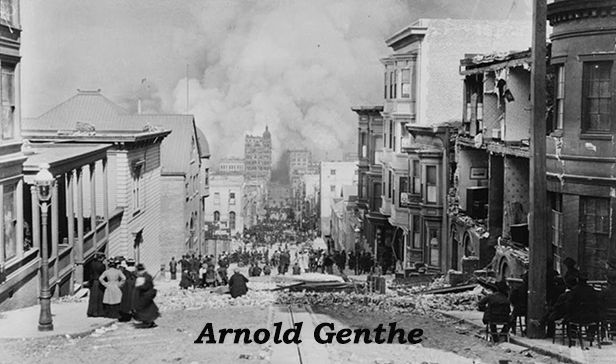 Today you will meet Arnold Genthe (1869–1942) a German-born American photographer who recorded the 1906 San Francisco earthquake on film and became a member of the artist community in Carmel. Image: Looking Down Sacramento Street, San Francisco. 1906 ( lightstalking.com)