The 25th April is celebrated in Australia and New Zealand as a National Day of Remembrance. On this day we remember all Australians and New Zealanders who served and died in all wars, conflicts, and peacekeeping operations and the contribution and suffering of all those who have served. Originally this Day of Remembrance was devised to honour the members of the Australian and New Zealand Army Corps (ANZAC) who served in the Gallipoli Campaign, their first engagement in the Great War (1914–1918). (Wikipedia)

Today we take time to remember all those who have fought to make this world a better place. I've decided to start on a personal note. Above is a photo of my father who joined the CMF (Citizen Military Forces) the day he turned 18 years. The CMF is now the Australian Army Reserve. Like so many of the young men of the time my father believed in being prepared to fight to preserve the freedom our country enjoyed.

My father ended up serving as a Major in New Guinea during World War 11. As I grew up he would tell us about the people he met and the ones he had so much respect for: the Salvation Army, the local priest who refused to be evacuated from his flock, the wonderful Papua New Guineans who fought alongside the Australian troops- two of whom personally helped save my father's life when he collapsed from exhaustion on the Kokoda Trail. And my Dad spoke of the young nurses who had so courageously volunteered to enter a war zone to tend to the wounded and dying. Many of the nurses gave their own lives in this service. 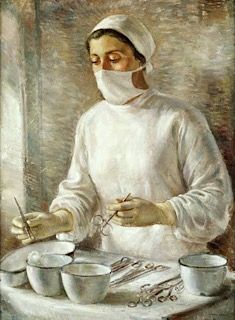 In 1944 a young woman was sent to New Guinea. This woman was not a nurse but Australia's first female war artist. Nora Heysen, who painted the image above, had already gained fame as the first woman to win the prestigeous Archibald Prize for portraiture. Nora had inherited her prodigious artistic talent from her father Hans Heysen, one of Australia's best known early artists. Here is a self portrait of Nora, her courageous spirit and steely determination clearly portrayed. 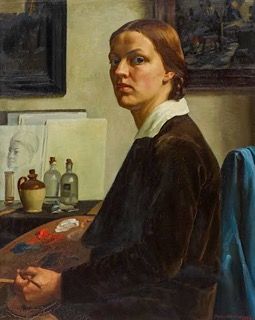 Below are the portraits of three World War Two nurses portrayed through the eyes of Nora Heysen.

Nora Heysen wanted to capture all aspects of life in a war zone including nurses relaxing at an Australian Casualty Clearing Station in New Guinea in 1944. Heysen had been instructed to capture the work of nurses, and was criticised by her commander for depicting them a leisure.

Nora Heysen's remarkable sketches and paintings capture the ordinary Australians who so gallantly served to preserve our freedom.

They shall grow not old, as we that are left grow old: Age shall not weary them, nor the years condemn. At the going down of the sun and in the morning, We will remember them. (Laurence Binyon)

I've been talking with the artist John Pickup about using colour. His first piece of advice is to "be brave and experiment with colour". Don't be frightened to add the unexpected as John has shown in his "The Queen's Troubadour".