Yesterday I checked out the Hayward Gallery in London to see the works of Hicham Berrada- following my interest in the marriage between science and art. Berrada is another wonderful example of the marriages that are occurring between Art and Science because he is using scientific processes for creative ends.

Berrada involves in his works laboratory practices that imitate certain natural processes and climate conditions. He is interested in looking at science not as a theme in his art, but as form of culture in itself.

The exhibition consisted of a series of small illuminated tanks featuring delicate and ephemeral chemical landscapes. Being greedy I would have liked there to be more of these terrarium type works and for them to be larger because these exquisite landscapes were dwarfed by the massive video work going on behind the tanks.

The large screen video work informed by scientific processes and natural phenomena such as heat, cold, magnetism and light was quite beautiful. And it was interesting to watch the changing shapes brought about through the biological processes.

But while I'm talking and science and art this is the perfect time to bring to you works created by two Australian women Christine and Margaret Wertheim who also exhibited at the Hayward Gallery in London in 2008. 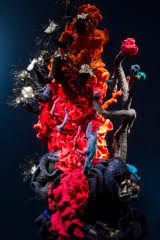 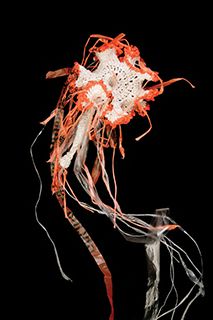 It's thanks to A of Oakleigh that I heard about these remarkable identical twin sisters who were born in Melbourne, raised in Brisbane and taught to sew and weave from a very young age to help their mother make ends meet. (The Age, 11 May, 2019)

And then they went their separate ways: Margaret studied Maths and Physics in Australia and became a Science Communicator. Christine studied Fashion Design, Painting in Italy and Critical Theory in Britain.

In 2001, they reuinited and founded the Institute for Figuring - an organisation devoted to the aesthetic and poetic dimensions of mathematics and science.

In 2005 in their Los Angeles living room, and for the next four years, the sisters began making The Crochet Coral Reef.

The Crochet Coral Reef is a woolly celebration of the intersection of higher geometry and feminine handicraft, and a testimony to the disappearing wonders of the marine world. It grew from the home of Christine and Margaret Wertheim into a worldwide movement that engages communities across the globe from Chicago, New York and London, to Melbourne, Dublin and Capetown. The Crochet Reef is a unique fusion of art, science, mathematics, handicraft and community practice that may well be the largest community art project in the world.(crochetcoralreef.org) In 2019, the project is reported to have more than 10,000 people, mostly women, working on The Reef (The Age 1 May 2019).

The inspiration for making crochet reef forms begins with the technique of hyperbolic crochet discovered in 1997 by Cornell University mathematician Dr. Daina Taimina. The Wertheim sisters adopted Dr Taimina's techniques and elaborated upon them to develop a whole taxonomy of reef-life forms. Loopy kelps, fringed anemones, crenelated sea slugs, and curlicued corals have all been modeled with these methods. The basic process for making these forms is a simple pattern or algorithm, which on its own produces a mathematically pure shape, but by varying or mutating this algorithm, endless variations and permutations of shape and form can be produced. The Crochet Reef project thus becomes an on-going evolutionary experiment in which the worldwide community of Reefers brings into being an ever-evolving crochet tree of life. (crochetcoralreef.org)

As a totality, the Crochet Reef has grown far beyond its original incarnation on the Wertheim's coffee table so that today it is made up of many different “sub-reefs,” each with its own colors and styling. Major sub-reefs include the Bleached Reef, the Beaded Reef, the Branched Anemone Garden, the Kelp Garden, and The Ladies’ Silurian Atoll, a ring-shaped installation with close to 1000 individual pieces made by dozens of our most skilled contributors around the world. In addition to these delicate woolen reefs is also a massive Toxic Reef crocheted from yarn and plastic trash - a part of the project that responds to the escalating problem of plastic trash that is innundating our oceans and choking marine life. (crochetcoralreef.org)

A new incarnation of the Crochet Coral Reef was chosen for the main exhibition at the 2019 Venice Biennale of Art.

Christine and Margaret Wertheim’s Crochet Coral Reef sits somewhere between sculpture and a device for learning, a botanical, biological model.(labiennale.org) If you would like to know more please check out the website and the artists involved on The Crochet Coral Reef especially if you are intereseted in starting your own coral reef work of art.

All year round the landscape of Lapland is breathtaking, as is the flora and fauna - we especially loved the reindeers - this time of year their coats getting thick, ready for winter; antlers regrowing and covered with silky velvet.

Giving a shoutout to Emily Miers for her remarkable swim across the English channel to raise money for Dr Orazio's research at the Children's Cancer Institute.