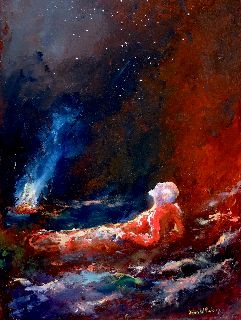 When I look at John's painting I am reminded of the incredible grandeur of the sky in the Australian outback.

I want to start examining the relationship between Science and Art and I thought the best place to start is above us, in the skies. I know nothing at all about this aspect of our lives, either in terms of the science or the art. So I will be learning along with you. To get you inspired just look at the magnificence of this photograph of the Night Sky taken by Eric Hines.

Surfing the net has revealed a plethora of creative works classified as Astronomical Art- including photographs, paintings, digital works, 3D models, sculptures. In fact in many cases the creation of the image or work of art is so complicated it is beyond my understanding. So where to start?

With the Hubble Space Telescope seems to be the best place to start because we all know of its work. The telescope was launched into low Earth orbit in 1990 and remains in operation. It was not the first space telescope, but it is one of the largest and most versatile and is well known as both a vital research tool and a public relations boon for astronomy. The Hubble telescope is named after astronomer Edwin Hubble and is one of NASA's Great Observatories, along with the Compton Gamma Ray Observatory, the Chandra X-ray Observatory, and the Spitzer Space Telescope. (Wikipedia)

To celebrate the Hubble telescope’s 25th anniversary, Zoltan Levay and other astronomers reimaged the famous Pillars of Creation (below).

Today I would like you to watch a video produced by Zoltan Levay to show how he is turning Hubble data sets and scientific images into works of art. The video is about 8 minutes long and I can assure you it is the most fascinating 8 minutes of unimaginable images I have ever seen. Please take time to check out this fascinating field of work.

Today Artsy bings you some American Photographic Collectables. If you don't have *a spare few thousands to make a purchase just browse the images or the photographers to enjoy some iconic snaps of American history.