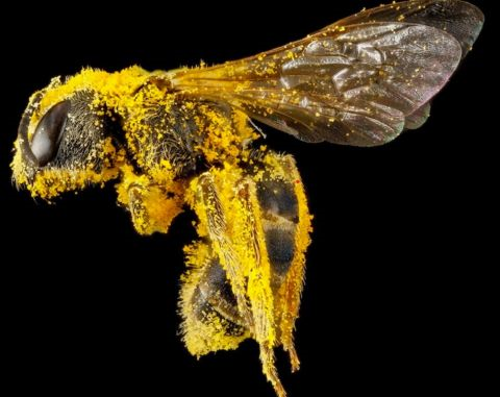 Researcher Sam Droege created the photo by programming a camera with a macro lens to take sets of photos of varying focal depth then blended several photos together (Credit mymodernmet.com)

You know bees are a hot topic when an article on bees appears in the RACV “Royalauto” magazine (Ed Feb – Mar 2020). The article written by Larissa Dubecki highlights that “three out of four food crops and 90 per cent of wild plants depend to some extent on bee pollination”.

After the recent bushfires in many states of Australia decimated the bee population, we thought we should highlight what some people are doing to bring attention to bees.

Bees have history spanning 100 million years, so it is hard to know where to start, quite daunting really, perhaps we should start way back then.

The earliest recorded bee was found in 2006 in a mine in Myanmar by scientist, George Poinar, a zoology professor at Oregon State University. The bee was encased in amber and has been dated as 100 million years old, making it possibly the oldest bee ever found. 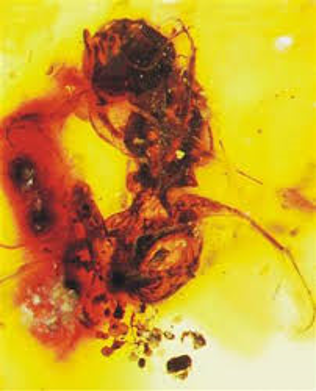 Also embedded in the amber are four kinds of flowers. The amber is a translucent semiprecious stone, a substance that begins as tree resin. The sticky resin entombs and preserves insects, pollen and other small organisms. "So, we can imagine this little bee flitting around these tiny flowers millions of years ago," Poinar said. To read more about this remarkable little bee Click Here.

In Ancient Egypt and the Middle East, honey was used to embalm the dead and was the most important sweetener for food and alcoholic drinks. So important were these activities that parents named their children after bees. Both Deborah and Melissa mean "bee", in Hebrew and Greek respectively. Honey has been sought as an antiseptic and sweetener for at least 100,000 years.

In fact, it wasn't until Egyptian times that people started to keep bees at home. The Egyptian hive design was a simple upturned straw basket called a skep. These are still used today although mainly for temporarily housing a colony of bees that has recently swarmed. 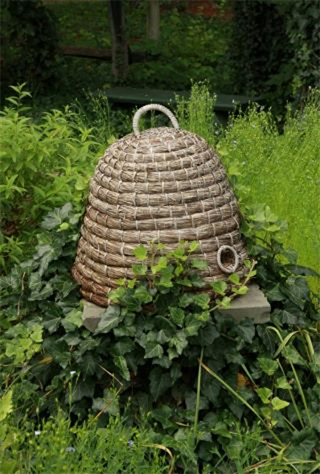 A friend of the blog, AL from Melbourne, enlightened us to the fact that after much consideration, Napoleon chose the bee as the emblem to represent his status as Emperor.

Napoleon needed a new personal symbol for him and his family, to replace the fleur-de-lys of the deposed French Bourbon royal family. Interested in finding out more about this aspect, Caroline (with her diligent research) found that the National Gallery of Victoria (NGV) has a Napoleon Curatorial Team which blogged “the bee is a motif rich in meanings, due to its industrious habits the bee has come to symbolise hard work, diligence, industriousness and orderliness. Because it is also the producer of honey, the bee also symbolises sweetness and benevolence.”

According to legend the bee never sleeps so it has also come to imply vigilance and zeal – both attributes Napoleon was happy to own. Numerous versions of the bee were commissioned by Napoleon – from tiny sculptural representations, usually gilded and commonly attached to items such as snuff boxes, to the embroidered motifs on his coronation robe and printed or painted images on wallpaper.(ngv.vic.gov.au) 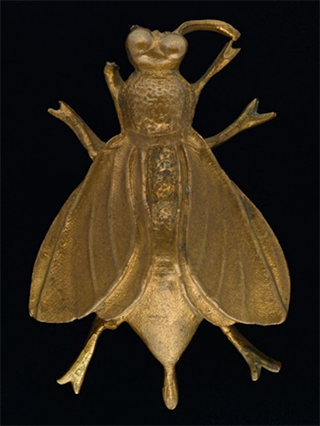 From a set of replica coronation robes for Emperor Napoleon and Josephine. 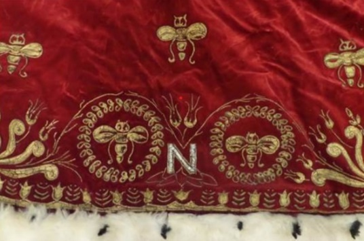 And this Clasp (below) bears Napoleon's bee heraldry, c. 1804 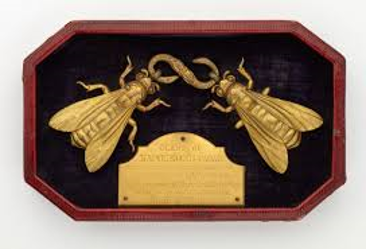 The Revolutionary era saw the elegant decoration of the age of Louis XVI replaced with symbols of liberation and political commitment. The Consular style shed these Revolutionary symbols, adopting a taste for more lavish classical ornament. The Empire style, recognised as beginning with Napoleon’s proclamation of himself as Emperor in mid-1804, continued to combine references drawn from the ancient cultures of Greece and Rome with newly fashionable Egyptian imagery. (ngv.vic.gov.au)

As Anne informed you a few days ago, we are having a Bee Week. Tomorrow we will continue with more on the design of bee hives and the revelation of some remarkable information.

LATE MAIL
We are starting the week with another new subscriber. A very warm welcome to N in Melbourne and as we are focusing on bees we do hope that you like them. Welcome aboard.

Here we first explain the meaning of 'bee space' and then go on to explore the notion of bees as members of the family who were informed of events such as births, marriages and deaths through the tradition of 'Telling the Bees. 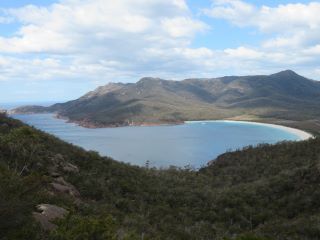 Julie takes us back to Coles Bay in Tasmania, Australia. At the entrance to Freycinet Peninsular it contains spectacular scenery and is a nature lovers' paradise. Keen walkers and artists are recommended to visit taking their easels and paints with them ready to capture the memorable sights.