Melbourne, the capital city of Victoria and the fastest growing city in Australia, is set to take over as the largest in the very near future. But today it is shrouded in silence due to the unusual circumstances the world is experiencing in 2020.

Below is the most recognisable feature of Melbourne: the Flinders Street Railway Station, the oldest railway station in Australia with construction commencing in 1905.

DownHere in Melbourne we have an expression: Meet me under the clocks1 and everyone knows exactly to what this refers. Under the beautiful arched doorway of the station is a line of clocks giving the times for the next train leaving from each of the platforms. This expression and tradition is over 100 years old and was used especially by young men setting up a date with their chosen girl.

Under normal conditions our young people use the steps to "park on" and whilst it can be extremely annoying trying to get past on some days, most of us yearn for these times to return.

My cousin Colin Morris is one of the photographers who has taken the opportunity to capture the empty city streets like we have never seen them before. Here is a side view of the Flinders Street Railway Station with only a few brave souls to be seen.

One block away from the railway station is our Bourke Street City Mall: the centre of the shopping precinct of Melbourne. This is usually a hive of pedestrians with the only vehicles allowed being our lovely trams and delivery vans.

Melbourne is a beautiful and gracious city and she is known for her elegant arcades and the thriving cafe life in the lanes that connect the main streets. So let us take a look at Block Arcade constructed between 1891 and 1893 and considered to be one of the finest examples of late Victorian architecture and design.

Denuded of people gives the arcade the chance to show off her glorious features.

Within the Block Arcade is the Hopetoun Tea Rooms first established in 1891 as a small tea room for the Victorian Ladies Work Association and named after the Association's founder Lady Hopetoun who was also the wife of Victoria's first governor.

Nowadays ladies go to the Hopetoun Tea Rooms to partake of tea, scones and a little light gossip! Not at the moment sadly. But take this opportunity to marvel at the decor especially the beautifully etched mirror.

And below is Melbourne's beautiful Royal Arcade - the first arcade to be built in Melbourne being completed in 1870 and is the longest-standing arcade in Australia.

In 1868, a major competition was held for the design of the Royal Arcade. The winning entry was by Mr Charles Webb, a 19th Century architect from Suffolk, England. His successful design was in the Italianate style, drawing on influential French and English models demonstrating essential qualities of those traditional styles.2

Melburnians love to eat and we boast the best international menu in the world plus the best coffee. On a normal day ( all 7 of the week) you can't move for people enjoying food and company in one of our smaller streets or lanes. Centre Place on the left and Degraves Street on the right are ready for the throngs to return.

And of course, like all cities, we have our huge food halls where the business people gather to discuss the rise and fall of fortunes. Today as Colin roamed the commercial precinct: no-one!

One of Melbourne's most famous building complexes is the Queen Victoria Market which has been looking after the needs of Melburnians for more than 140 years. But today its Deli is almost empty except for those few who just could not survive without the special delicacies they have come to rely on for so long.

For those of you who have never been to Melbourne, the city sits on the banks of the Yarra River which winds its way through the buildings, freeways and gardens to its source high in the Yarra Ranges that form part of the Great Dividing Range which runs down the eastern seaboard of Australia.

Who doesn't like taking in the sun, a cup of coffee, a sandwich, and some chat with a friend or colleague along a waterfront?

Today as Colin and his camera travelled the length and breadth of our city: not a soul was to be seen along the South Bank of the river. No rowers out for their early morning exercise, no river traffic.

We conclude Colin's stroll with a shot of Hosier Lane a street artist's delight reminding us that our familiar buildings and their surroundings have not changed and are waiting to embrace us all once more.

You might like to walk with subscriber Chris O'Brien who recently shared with us his experience of lockdown in New York.

Please send in your photos of "your city in isolation" if you would like to share them on the AnArt4Life blog.

Or as the World Awakens you might capture a moment that is memorial. We would love to travel this journey with you.

And a special thanks to Chris and Colin for agreeing to take us on their travels around New York and Melbourne in early 2020. 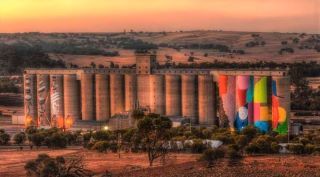 The Silo Art in Northam, Western Australia was just the beginning of a huge number of silos and water towers now painted across Australia. (Photo: Courtesy of Bewley Shaylor, and Huffington Post).