I had intended to write about an escape to Iceland, however Melbourne and the southern parts of Australia have just experienced a polar blast for several days. Winds from the Antarctic have been icy, snowfields transformed to a white wonderland, a month ahead of the official ski season. Its too cold to escape to Iceland for us, so I’ve chosen a tropical island instead.

Samoa is what we imagine to be the quintessential tropical island – white pristine sands, warm crystal clear waters, coral reefs where colourful fish abound and lush vegetation dotted with vibrant colours of flowers, along with fun loving friendly people. With a girlfriend, I spent 5 days over Easter in 2018 exploring the island and enjoying its delights.

Everyone smiles and waves, colourful clothing strung on lines, chooks run about in a neurotic frenzy, dogs sleep, pigs saunter onto the road and cows look up disdainfully. One village leads to the next - over 300 villages make up the population of 194,000.

Locals often walk along the roadside or use the colourful public buses: when the bus fills up, people sit on each other’s laps. Utes are another transport option, often up to 8 in the back.

The Baha'i Temple of Samoa, one of only 8 in the world, was built in 1984; a place of prayer and meditation open to peoples of all backgrounds; the only other visitors, a wedding party taking advantage of the well-manicured grounds.

Samoa has a few other claims to fame. To Sua Ocean Trench - two sink holes, flanked by sheer vine covered walls. We descended the wooden ladder to swim in the alluring aqua waters. One of the most photographed natural wonders in the world, surrounded by a well-tended garden with great coastal views.

Robert Louis Stevenson spent the last 4 years of his life in Samoa – building and living in Vailima, (The Five Waters), set on Mt Vaea overlooking Apia. His home is now a museum displaying the furniture he imported from Scotland, first editions of his novels and spacious rooms where he entertained locals and dignitaries with his stories.

The Samoan people affectionately named him Tusitala (teller of tales) and respected his support for them against the British, Germans and Americans, maintaining they should have the right to preserve their own customs.

R L Stevenson was often sick and knew he would die at a young age. He wrote his own requiem poem, set to music and still sung in all Samoan schools. As part of our tour, two of the guides sang it for us accompanied by a ukulele – a charming experience.

Return to Paradise beach along the South West coast is named after the movie starring Gary Cooper in 1954 – a great snorkelling spot.

Close by we visitied Savaia Marine Biodiversity Park, wading into the balmy clear waters to view giant clams nestled into the sandy bay.

Baby clams were a mere 30cms wide, while the grand daddies closer to a metre wide, shells open and a mass of vivid multicolours - white, blue, green, pink, brown - it was tempting to touch the soft centres or delve into their depths. Not recommended if we wanted to keep our hands!

A wonderful sight. Without an underwater camera, below some photos courtesy of TripAdvisor.

We saw some impressive art works and timber carvings at several art galleries. The church underpins many aspects of life in Samoa, including support to budding artists – the EFKS Museum one of the largest and run by the Congregational Christian Church. Artists in the main must venture to New Zealand though to make a living.

It’s the people that found a soft spot in our hearts. Our resort was small and we felt part of the family. Over the Easter break, the staff entertained us with a traditional Fia Fia show, very similar to the way they celebrate with their own family groups.

In Apia we were invited to join a cultural experience – tasting the local food, trying our hand at basket weaving, watching other handicrafts being made, finishing with a colourful and energetic show. Samoans like so many South Pacific cultures know how to have a good time either with friends, visitors and especially with family.

I hope the tropical photos below warm your skin and hearts. Finally no island escape is complete without a glorious sunset.

All photos are my own, unless otherwise stated. 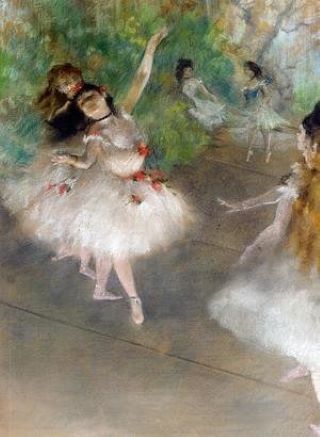 There's more to know about Edgar Degas than his famous ballet scenes! We delve into the life of this volatile, but very talented, artist, draughtsman, printer, sculptor and photographer. Photo: Courtesy of edgar-degas.org.com