Recently I referred to two great polymath figures in our history. One of these is Leonardo da Vinci.

Leonardo di ser Piero da Vinci (1452-1519) is known for many, many great achievements but today we are going to look at his interest in the human figure.

It is exactly 500 years since Leonardo died and he would have to be one of the most talked about figures in world history and contemporary conversations. Only last week I was discussing with some friends whether we liked (or not) the Mona Lisa.

I will confess- the Mona Lisa is not up high on my favourite paintings and it's not because when you do finally get to see it in The Lourve you are shocked to see how tiny it is. No, I quite like tiny paintings. Mona Lisa just didn't impart the necessary bolt of lightning I like to experience when I look at a masterpiece. My favourite Leonardo work of art is the Virgin and Child with Saint Anne and Saint John the Baptist, sometimes called The Burlington House Cartoon which is in the National Gallery London. I am sure to have mentioned this painting before. 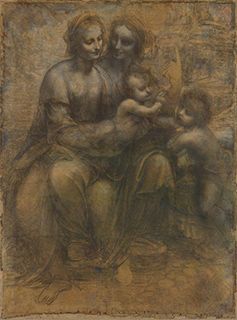 I love this cartoon and not for any religious reason- it is a perfect example of pyramidal composition and Leonardo's ability to draw the human figure with a delicate touch to show implied emotion and its accompanying movement.

So how did Leonardo become so good at drawing the human figure? As most of you will know- he studied the human body in the flesh (literally) and learned all about its intricacies through dissecting dead human remains and then practising drawing what he could see.

Leonardo started his study in the anatomy of the human body under the apprenticeship of Andrea del Verrocchio, who demanded that his students develop a deep knowledge of the subject. As an artist, he quickly became master of topographic anatomy, drawing many studies of muscles, tendons and other visible anatomical features. (Wikipedia)

As a successful artist, Leonardo was given permission to dissect human corpses at the Hospital of Santa Maria Nuova in Florence and later at hospitals in Milan and Rome. From 1510 to 1511 he collaborated in his studies with the doctor Marcantonio della Torre. Leonardo made over 240 detailed drawings and wrote about 13,000 words towards a treatise on anatomy. These papers were left to his heir, Francesco Melzi, for publication, a task of overwhelming difficulty because of its scope and Leonardo's idiosyncratic writing. The project was left incomplete at the time of Melzi's death more than 50 years later, with only a small amount of the material on anatomy included in Leonardo's Treatise on painting, published in France in 1632. (Wikipedia)

Da Vinci made many studies of the human skeleton and its parts, and of muscles and sinews. He produced what is considered to be the first accurate depiction of the human spine.

Leonardo drew was one of the first scientific sketches of a fetus in utero. 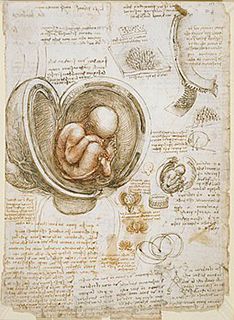 Leonardo also closely observed and recorded the effects of age and of human emotion on the physiology, studying in particular the effects of rage. He drew many figures who had significant facial deformities or signs of illness. (Wikipedia)

Below is a drawing that demonstrates the reality of battle reflected in an old warrior's eyes...and it brings with it the despair, sorrow and numbness of a lifetime of violence. (theguardian.com)

When Leonardo drew this compelling head, flanked by a second grimacing profile, in about 1504 he was in his early fifties and had spent much of his life working with soldiers and men of war.

Those experiences are distilled in the bleak eyes, the despairing scream and the leathery skin – superbly created using soft grey shade – of Leonardo's bitter survivor. He has death in his eyes. What has he seen? What has he done? We see in this portrait the faces and the inner beings of mercenary soldiers Leonardo knew, fighting their battles for power and money. The drawing has a nightmare quality reminiscent of Shakespeare's Macbeth, as the weary soldier screams as he glimpses the evil of his life.(the guardian.com)

If you have time you might like to have a go at copying some of these Leonardo created images. The genius of the artist can be almost felt in the confident sweep of his lines.

So what made Leonardo such a brilliant anatomist? “One mustn’t get carried away claiming that Leonardo was a completely unique figure,” says Martin Clayton, head of prints and drawings in the Royal Collection, and the curator of the Edinburgh exhibition. “There were lots of investigative anatomists around at the time, and there were lots of artists who were interested in anatomy. But Leonardo pushed these two things further than anybody else. He was the supreme example of an anatomist who could also draw, or of an artist who was also a very skilled dissector. It was the union of these two skills in a single figure that made Leonardo unique.” (Alastair Sooke art critic of The Daily Telegraph/bbc.com)

POSTSCRIPT
Apologies for some of the links not working in yesterday's blog on Sheila Cruthers. If you want to follow up on these please reenter the blog which is on the list of Recent Articles on the bottom of today's blog.

Little known French artist Jacques Boullaire also lived and painted in Tahiti as did Paul Gauguin. Boullaire married Anne Herve and they spent their lives living between Paris and the Pacific Islands.

Introducing Sheila Cruthers, an art collector and a philanthropist of note. What makes Sheila different to other who championed Australian women artists.