This week our mail is brought to us by Postman Roulin who was a particularly good, loyal and supporting friend to Van Gogh during his stay in Arles. (wikipedia)

Let's see what he brought to us in his mail bag. 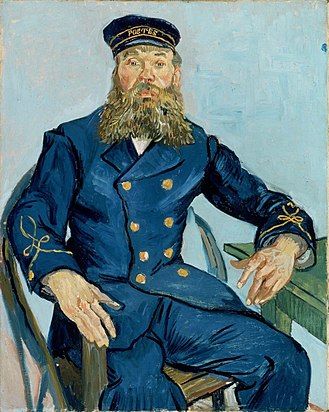 The Roulin Family is a group of portrait paintings Vincent van Gogh executed in Arles in 1888 and 1889 on Joseph, his wife Augustine and their three children: Armand, Camille and Marcelle. This series is unique in many ways. Although Van Gogh loved to paint portraits, it was difficult for financial and other reasons for him to find models. So, finding an entire family that agreed to sit for paintings — in fact, for several sittings each — was a bounty.

Joseph Roulin became a particularly good, loyal and supporting friend to Van Gogh during his stay in Arles. To represent a man he truly admired was important to him. The family, with children ranging in age from four months to seventeen years, also gave him the opportunity to produce works of individuals in several different stages of life.

Rather than making photographic-like works, Van Gogh used his imagination, colours and themes artistically and creatively to evoke desired emotions from the audience. (en.wikipedia.org)

Taking you on a journey around the garden and art works created by Bruno Torfs in Marysville- destroyed in Black Saturdeay fires and rebuilt to be even more inspiring.

Showcasing the "snow art" being created by Simon Beck, snowshoe artist. Includes an article by Alex Bellos from The Guardian & one by Ilana Herzigonand from Artsy plus a video.