Before we get onto today's blog, a very warm welcome to I of London, our latest subscriber from that beautiful green isle of England. It is wonderful to be attracting new subscribers because it confirms we are producing content that is appealing to a growing group of people interested in art. But please don't hestitate to send in feedback and suggestions because without the subscribers there is no blog.

Yesterday we started looking at the remarkable works of Lee Krasner (1908-1984), the American Abstract Expressionist who was born Lena Krassner in Brooklyn, New York, 1908. Growing up, she liked to be called Lenore, and later shortened the nickname to Lee, while also removing the second "s" from her last name.

Krasner's parents were Russian-Jewish immigrants who fled to the United States to escape anti-Semitism and the Russo-Japanese War. (biography.com)

In the mid 1930s The New Deal program was instituted by the US government under President Franklin Roosevelt to revitalize the American economy in the midst of the Great Depression. Its goal was to introduce art and culture to a general public and foster a new awareness and appreciation for the arts among them. Part of the program put artists unemployed in the fine arts, theater, and music back to work creating for the public (this was the Public Works of Art Project, succeeded by the Work Progress Administration). (artsy.net)

This program marks the first major patronage of the visual arts by the US government. 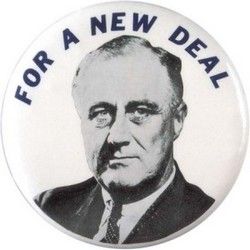 As part of the New Deal program, some artist were employed to illustrate books. Lee Krasner drew pictures for marine biology textbooks. Unfortunately I couldn't find any of her illustrations but I imagine they would be superb given her drawing ability.

In 1933 Franklin Roosevelt launched the Public Works of Art Project (PWAP), a scheme that would employ more than 3,700 artists to decorate public buildings as part of his New deal programme to counter widespread poverty and unemployment. (Barbican Gallery Guide)

Krasner was approached to oversee the design and execution of twenty department-store window displays in Manhattan and Brooklyn, advertising war training courses that were being made available to the public in municipal colleges (Barbican Gallery Guide)

Leading the commission, Krasner was asked to oversee a team of male artists ('misfits", as she called them), which included William Baziotes and Jackson Pollock. She attended a number of classes as part of her research for the project, including one on the chemistry of explosives, which she described as 'an alchemist's dream'. (Barbican Gallery Guide)

Here are some of the photographs I saw at the exhibition which sadly have lost the impact they had in the Barbican Gallery. Nevertheless they are very interesting.

Tomorrow we will conclude our review of the works of Lee Krasner by appreciating some of her abstract works which made her famous.

Lee Krasner (1908-1984) who was a pioneer of Abstract Expression and played a significant role in making New York a thriving centre for modern art in the postwar period.