Back in September 2020 subscriber John Wylie and I introduced you to the works of Australian artist Clarrie Cox who brought alive, with his brush and unique style, many of the early European settlement towns of Australia.

Now with the generous help given by Clarrie Cox's family we can open the door wide on Clarrie Cox's creative perception of what he saw as important elements in our Australian pioneer heritage.

Clarrie Cox (1927-2013) was a self-taught artist who could draw just about anything but who had a real penchant for buildings. As a display artist Clarrie had an eye for detail, especially the architectural features of early Australian buildings.

Very early in his adult life Clarrie started painting pictures as presents for friends and family and at least once travelled 1000s of kilometres to get the right photograph. In a newspaper clipping provided by his family1, Clarrie recounted how one of his mates asked him to paint a picture of his hotel which just happened to be at William Creek which is in the South Australian desert and over 2000 kms from Sydney where Clarrie lived.

And so Clarrie Cox drove out to William Creek near Kati Thanda–Lake Eyre in South Australia to take the necessary photographs - returning home to paint the image of the hotel as shown in our first post on Clarrie Cox - Long Lost Australian Artists: Clarrie Cox- A Bonza Bloke: Part 1.

As part of his work in advertising he did travel around much of the east of Australia - his own home state of New South Wales and Victoria where he observed and photographed the towns built by the early settlers. Something in these buildings captured Clarrie's artistic passion which lead him to create thousands of paintings over his lifetime.

Demands of work and raising a family put the innate talent and passion of Clarrie Cox on hold until around 1972 when he had the creative urge to have an exhibition of his paintings which he held at the local Patana Gallery, Manly Vale, NSW. He went on to have many more exhibitions at this and other galleries over the next few decades. His paintings are now part of private collections in Australia, Europe and America.

And then later in 1972 a tax refund cheque for $10.40 arrived and the die was cast! Realising that he didn't owe anyone anything Clarrie saw the opportunity to dedicate his time to painting.2

He had the passion and the energy and of course the vision; he knew he wanted to dedicate his life to creating paintings of the quaint Australian buildings that grace our country towns as icons of the pioneering days.

But Clarrie required a studio and artist's equipment if he was going to paint full time. And so, as his daughter recounts, he pinched Mum's ironing board, nailed the laundry door to the top as a painting table and set up slap bang in the middle of the lounge room! When I got married he moved into my old room. At my wedding he went round saying: “I’ve lost a daughter but gained a studio” and was very happy about it!

Although Clarrie Cox painted many different subjects he is best known for the buildings which have been recorded in book form3 and on place mats, cards, calendars and china ware. There are homesteads, houses, pubs, shops, railways stations - all the buildings that make a country town: rows of miner's cottages and those main streets that go on forever. The paintings were produced mainly in oils though Clarrie did some works in pen and ink, acrylic and pastels.

When John Wylie first discovered the paintings of Clarrie Cox he described them as: highlighting the era, the true pioneering days where the old timber framed buildings and barren landscapes mix with the unique dark orange skies and bright/light foregrounds. Clarrie's paintings have a delightful simplicity and the details on the buildings, and the landscape even down to the fence posts, and attention to the light and shadows engage the viewer instantly.

Some buildings stand proudly defying the odds, others convey a sense of desolation, corrugated iron abounds, weathered bricks and peeling weatherboards: all contain threads to early settlements. He paints in a semi-impressionistic style and captures a nostalgic mood with sensitivity.

To quote from a review of Clarrie Cox's first book Historic Towns of Australia3 Mr Cox is a sensitive artist...who captures the fading heritage of a decaying bond store at Stanley on Tasmania's north-west coast; the forlorn isolation of the bypassed railway station at Quorn, 300km north of Adelaide; the tired elegance of what was once a hotel at Coolgardie, a Western Australian gold-mining boom town that went bust; and a host of other structures which remind us of our legacy.4

For many of us the paintings bring back memories of the towns we passed through on those Sunday afternoon drives. I remember that every town had a pub (or 2 or 3...); the forlorn and fading deserted shops. Here are two examples: one from the beautiful town of Maldon which has been preserved, and the other from Goorngong - both in Central Victoria.

Note that Clarrie dusts many of his images with a golden hue. I have learnt from his family that he loved the sepia tones so reminiscent of the old prints.

I think that perhaps Clarrie didn't want to reproduce an exact copy of a building but aimed to bring the atmosphere and emotions of earlier times into the present: a reminder of the golden past.

Occasionally amongst the Clarrie Cox works we discover a totally different landscape - the beautiful waters that surround Australia occasionally appear - from the south in Tasmania to the far north in Queensland.

After seeing the extent of paintings by Clarrie Cox one would assume he spent his life travelling the length and breadth of Australia photographing the buildings in the towns. Whilst this is true of most of the paintings where the location was in the eastern states, most of the paintings are based on the extensive research of images from books that Clarrie carried out in libraries. No doubt referring to very early photographs of the places he chose to paint.

Clarrie Cox was a Sydney boy and of course he produced many paintings that capture the charm of the famous Sydney suburb of Paddington which abounds with beautiful terrace houses built from around the 1860s onwards.

Early in his career as an artist Clarrie painted this charming Paddo house with the deep sepia sky behind.

But his later Paddo Paintings are quite different in style to the outback towns. There is a looser hand at play here and an even more impressionistic style. All these paintings are done in oils and you can see that Clarrie was experimenting with the effects he could achieve.

The quaintness of the houses in The Rocks area of Sydney have also been rendered on canvas by an artist who had fallen in love with architecture.

Marj Belessis reported from her interview with Clarrie Cox: Clarrie, like other artists, has done his share of Paddo terrace houses, but says it's the architecture of the outback that intrigues him most. 2

So why would a city boy want to spend the better part of his life painting the buildings of country towns?

From Marj Belessis' interview we learn that: "I was born in Waverley- a city boy - but there was a dairy at the back of our place and my father ran a bakery. I grew up with the smell of horses, straw and hot bread in my nose," he said. 2

Interestingly, although Clarrie loved the rich red brown and ochres of the outback Aussie towns The charming home he and his wife Joy share [shared] at Frenchs Forest, surrounded by gum trees, ferns and resident lorikeets, is [was] far removed from the reds, ochres and browns that represent Australia on his canvases. 2

In every painting Clarrie Cox has captured the unique character of the early Australian buildings even when they lose their golden sepia dusting when Clarrie moves across to pastels as shown below.

From all accounts Clarrie Cox was a very special person who could not see bad in anyone - he was, as we Australians like to say: a bonza bloke.

And this bonza bloke has given us images of early Australian buildings that will last forever. Thank you Clarrie and thank you to his family for their generous support in providing the images of the paintings, newspaper clippings and for sharing the artistic narrative of this great Australian.

Tomorrow we are going to show you some examples of his extensive portfolio of works which appeared on placemats, cards, fine porcelain and ceramics. 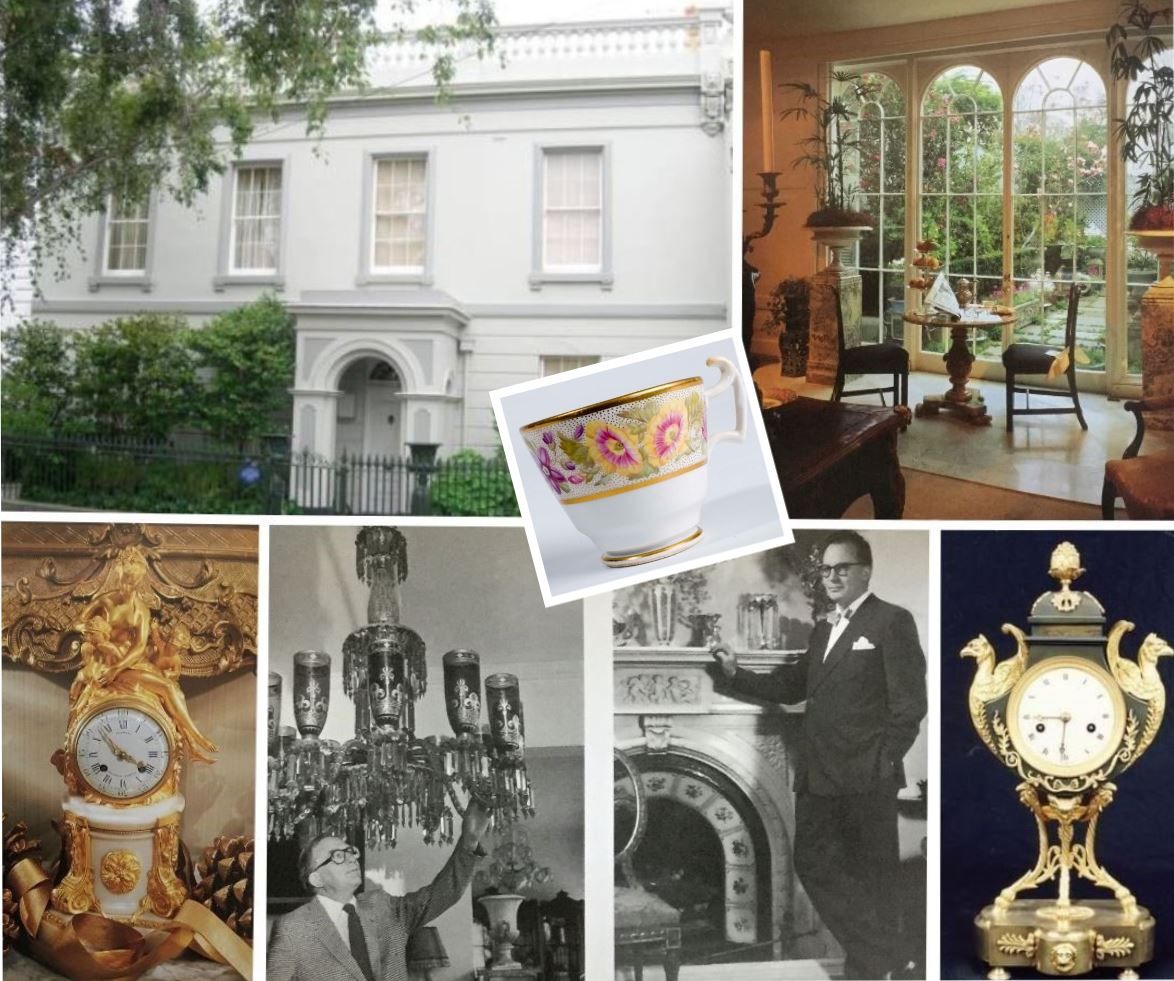