Yesterday I introduced you to Chesley Bonestell and his pioneering work in developing Astronomical Art. Alongside Bonestell on the other side of the world in France was Lucien Rudaux who must also be credited with taking art and the minds and dreams of Earthlings into outer space.

Lucien Rudaux (1874-1947) is relatively unknown today but he was an amateur astronomer and professional artist who during the 1920s to 1930s produced spacescapes of such accuracy that they still hold up well even today. (Ron Miller/io9.gizmodo.com)

In the painting above Lucien Rudaux has shown what he believed a lunar eclipse might look like from the surface of the moon. The moon's surface appears red because the only sunlight visible has refracted through the Earth's atmosphere on the edges of the earth in the sky. (Wikipedia)

And below Rudaux has imagined the vision from the night sky of Mars looking at its two moons.

At the age of 18 Rudaux joined the French astronomical society. He was among the first ever to observe a solar flare in white light and published numerous reports of this and his many other observations in the society's bulletin between 1892 and 1914. From 1903, he was a science writer and artist for Nature and, from 1905, for L'Illustration. (Ron Miller/io9.gizmodo.com)

In 2000, the IAAA (International Association of Astronomical Artists) created a Hall of Fame into which celebrated masters of the genré of Space Art would be inducted. Selecting a name to represent this distinguished and prestigious honor, in recognition and in acknowledgement for lifetime contributions to Astronomical Art, the IAAA instituted the Lucien Rudaux Memorial Award. Presented initially, and posthumously, to: Lucien Rudaux himself, Chesley Bonestell and Ludek Pesek and also to the artistic legends: Robert T. McCall, Jack Coggins, and Frederick C. Durant III.

Below is a painting by Rudaux of Mars as seen from the moon Deimos. A 65-km-wide crater on Mars is named in his memory as is the asteroid 3574 Rudaux.

Rudaux built his own private observatory near the coast of Normandy. Using its 4-inch reflector, he created pioneering photographs of the moon and planets as well as a photographic atlas of the Milky Way. 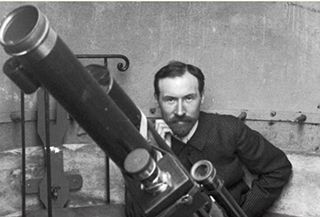 (Credit: Normandy Then and Now)

Meanwhile, he produced countless books and magazine articles, usually accompanied by his skilful illustrations. These were translated and reprinted all over the globe. Some of his articles bore sensational titles such as When the Moon Breaks Up, with appropriately apocalyptic artwork.

His masterwork, however, was a 1937 coffee-table volume called "Sur les Autres Mondes" (On Other Worlds). It featured more than 400 illustrations, including 20 full-page color paintings. Never before had readers seen such an accurate and spectacular depiction of the worlds of the solar system. So accurate were his paintings that many of them look as though they were done last year instead of more than 70 years ago. (Ron Miller/ gizmodo.com)

Rudaux visualized Venus as an eroded, rocky dust bowl and Mars as a dust-storm-swept wasteland of rock-strewn plains. He produced astonishing portraits of Saturn's rings (pictured below) and Jupiter as seen from its satellites. (Credit: Ron Miller/io9.gizmodo.com).

Lucien Rudaux was the son of the painter Edmond Rudaux, and grandfather by marriage of the French physicist Francis Rocard.

I've never wanted to go into space finding Earth quite exciting enough and certainly very beautiful. I have always felt that I would not like the desolate spacescapes
and I'm pretty fond of water to look at, play in and to drink!!

However, if I could be promised that Lucien Rudaux was accurate and I would find multicoloured shadows projecting at different angles then I might just sign up for a journey into space. But then would I be able to beam the blog back to you all? Requires considerable discussion.

As Ron Miller explains: Radaux even ranged beyond our solar system, imagining what the worlds circling other stars might be like. Here is an incredible painting of multicolored shadows on the planet of a binary star.

I have learnt a great deal about Lucien Rudaux through the writing of Ron Miller who himself is an illustrator specializing in science, astronomy, science fiction and fantasy and the author, co-author or editor of more than 50 books. He has designed postage stamps and worked on motion pictures as a production designer and special effects artist. His most recent book is The Art of Space: The History of Space Art, from the Earliest Visions to the Graphics of the Modern Era (Zenith Press, 2014). Below is one of his Spacelandscapes.

Please follow this link to read more about Lucien Rudaux as published by Ron Miller.

Astronomical Art is Space Art devoted to visualizing the wonders of outer space. A major emphasis is the space environment as a new "Frontier for Humanity". Alien worlds, extremes of matter such as black holes, and concepts arising from inspiration derived from astronomy are portrayed. (Wikipedia)