As you may have read in a previous post, Windsor Castle is the preferred home to Queen Elizabeth II, however Buckingham Palace is her official residence.

It has been the home and administrative headquarters for the royal family for hundreds of years, however it was only in 1837 that Queen Victoria, became the first official royal to call Buckingham Palace home.

To this day, Queen Elizabeth II uses the palace as a place for diplomatic meetings, celebrations, and a home for her family.

A short history in Town and Country magazine tells us:

The land on which Buckingham Palace was built has been in the royal family for over 400 years. It was originally marshland along the River Tyburn and the plot was acquired by King James I and meant to serve as a garden for the royal family. John Sheffield, who later became the Duke of Buckingham, bought the property with its pre-existing house in 1698, according to History.com.

Sheffield later had the original house replaced by the structure that stands today. Buckingham House, as it was commonly known, was designed and built by William Winde and John Fitch and completed in 1705. King George III then purchased the house back from Sheffield in 1761 to use as a home for his wife, Queen Charlotte, and their children.

Though the palace has been through many renovations, the most notable was during the time of King George IV, who was in very poor health when he commissioned John Nash to work on the structure. Nash extended the palace into a large U shape and expanded the building by adding west wings, as well as branches to the north and south.

Since its initial construction 400 years ago, it has grown into a truly regal palace, now boasting 775 rooms, which include 19 State rooms, 52 Royal and guest bedrooms, 188 staff bedrooms, 92 offices and 78 bathrooms.

The most recognisable aspect of the palace, the East Wing with its balcony as a centrepiece, was originally completed in 1850 and remodelled in 1913.

The Buckingham Palace balcony has become the iconic setting of many royal weddings and historical events over the years. The British exemplify pomp and ceremony and no more so than their appearances on the balcony which are carefully orchestrated with every royal having an assigned position. Trooping the Colour parade, celebrating the Queen's birthday, is the one event where you are guaranteed to see the royals, all together, on the balcony each year.

Other notable occasions included below:

And in more images we can see:

2&3. 2012 - The Queen on the balcony alongside Charles and Camilla, William, Kate and Harry at her Diamond Jubilee in 2012; and far right - the Queen flanked by her sons Charles and Andrew.

While the Queen is holidaying in Scotland, the State Rooms of Buckingham Palace are open for 2 months a year. I was in London at the right time in 2018 to take the self guided tour, with excellent audio commentary provided by Prince Charles. Below is a selection of just some of these splendid rooms.

Photos are not allowed, so all the images and details below are from the excellent website - Royal Collection Trust (rct.uk)

The 19 State Rooms are where The Queen and members of the Royal Family receive and entertain their guests on State, ceremonial and official occasions. They mainly reflect the taste of George IV and are furnished with treasures from the Royal Collection, including paintings by Van Dyck and Canaletto, sculpture by Canova, Sèvres porcelain, and some of the finest English and French furniture in the world.

I felt like a Queen ascending the Grand Staircase (above). Designed by John Nash and inspired by his experience working in London theatres, it provides a sense of excitement and expectation for the rooms that follow.

Full length portraits of immediate members of Queen Victoria's family decorate the upper part of the staircase (as above). These include her grandparents George III and Queen Charlotte, by Sir William Beechey, her parents the Duke and Duchess of Kent, by George Dawe and Sir George Hayter, and her uncle, William IV, by Sir Thomas Lawrence.

The Throne Room (above) is used by The Queen for court ceremonies and official entertaining, and was the setting for wedding photos of The Duke and Duchess of Cambridge. Its dramatic arch and canopy over the thrones was the masterpiece of the architect John Nash, and was greatly influenced by his background in theatre set designs.

The chair embroidered with 'EIIR' was used by The Queen at the beginning of the Coronation, up until the point that she was crowned. After the crowning ceremony she sat in the Throne Chair, which is on display in the Garter Throne Room at Windsor Castle.

The White Drawing Room (above), perhaps the grandest of all the State Rooms, other than the ballroom serves as a royal reception room for The Queen and members of the Royal Family to gather before official occasions.

This room has a secret door so the Queen can easily access the reception rooms - it also allows her to make a grand entrance.

It's behind the mirror and cabinet in the image below. Take a moment to admire the stunning portrait of Queen Alexandra, hanging above the fireplace.

This strikingly sophisticated and composed portrait of Queen Alexandra is perhaps one of the highlights of early 20th century royal portraiture. The artist, successful society portraitist François Flameng, paints the queen gazing directly at the viewer and wearing the small diamond crown made for Queen Victoria.

The Ballroom, the largest of the State Rooms, was completed in 1855, during the reign of Queen Victoria. It was originally known as the Ball and Concert Room and features a musicians’ gallery complete with an organ. Today, the Ballroom is used for official purposes, including investitures and State Banquets.

There are two thrones in the Ballroom which were made for the coronation ceremony of King Edward VII and Queen Alexandra in 1902. The thrones are located in a dramatic setting (top centre of above image). Statues by William Theed stand on top of a triumphal arch, flanked by sphinxes and enclosing the throne canopy. The winged figures at the top of the arch symbolise History and Fame and support a medallion with the profiles of Queen Victoria and Prince Albert.

It must be a surreal experience to attend one of these sumptuous banquets where nothing is left to chance.

Here is a short video, filmed in 2009 which gives you a taste of one such event.

The Picture Gallery (below) displays some of the greatest paintings in the Royal Collection. It was created by the architect John Nash as part of his transformation of Buckingham House into a palace for George IV from 1825.

The 47-metre room was designed as a setting for the King’s picture collection. The paintings in the Picture Gallery are changed quite regularly, as The Queen lends many works of art to exhibitions around the UK and overseas.

The Picture Gallery has always been used for official entertaining. Today it is the setting for receptions hosted by The Queen and members of the Royal Family to recognise achievement in a particular walk of life or sector in the community. It is also here that the recipients of honours wait before being led into the Ballroom for their investiture.

We also toured the garden, again no photos - we were closely escorted to ensure we didn’t break the rules. Our guide regaled us with some great stories.

Over the course of each year, The Queen welcomes over 30,000 guests to spend a relaxed summer afternoon, usually in the beautiful gardens of Buckingham Palace.

Around 8000 guests are invited to each tea party - the attention to detail is the same as for a visiting dignitary - lawns are (literally) vacuumed and any brown patches of grass are touched up with green paint!

In a recent documentary to mark Princess Anne’s 70th birthday, the Princess Royal, one of the busiest and most loved royal, mentioned she would venture to the edges of the garden seeking out the guests trying to maintain a low profile – 'definitely the most interesting conversations'.

Under previous royals an elephant and a giraffe roamed the grounds. These days only local birds and wildlife are attracted to the safe havens of the lakes and bushy undergrowth.

A national collection of 38 named varieties of mulberry has been tended in the palace grounds since 2001, a reminder of humble beginnings of the Palace as a failed silkworm farm.

Envious of France’s prowess as a producer of the luxurious silk that dominated 17th-century fashion and keen to develop a rival operation in London, King James I, planted mulberry trees to rear silkworms on the land where the palace now stands. Unfortunately, or perhaps as a result of intentionally bad advice from French adversaries, the enterprising British monarch chose the wrong type of mulberry. He ordered 10,000 black mulberry trees; however, when fed on anything other than the leaves of white mulberries, silkworms produce coarse thread – a far cry from the luxury item the king desired.

The garden includes a mulberry tree that dates back to the time of James I of England (1567) (image above).

Join me for a glimpse of the garden and a tea party.

Next week we cross the English Channel to France - an opulent royal mansion not far from Paris. 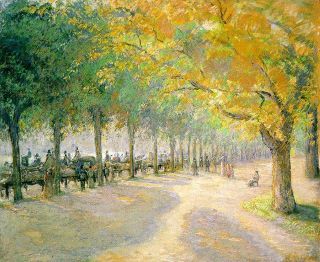 Today we look at Pisarro's involvement in the formalisation of the Impressionist group and his progression into the art styles of the up and coming generation of artists. Image: Courtesy of Wikiart.com