Perched atop a Californian hill more than a quarter mile above the Pacific Ocean, halfway between San Francisco and Los Angeles at San Simeon, Hearst Castle is a stunning tribute to the incredible wealth of one of the 20th century's most important businessmen and his extravagant tastes.

Named after newspaper tycoon William Randolph Hearst, Hearst Castle is reminiscent of a small Spanish hill town - in its centre is a cathedral-like building which is the main house - Casa Grande, surrounded by three opulent guesthouses, each larger than the average American home, surrounded by 128 square miles of privately owned ranch land.

Casa Grande and the guest houses at Hearst Castle contain 115 rooms, including 38 bedrooms, more than 40 bathrooms, a theatre, beauty salon, tennis courts marvellous outdoor pool as well as a Roman inspired indoor pool - it packs a punch with the furniture, tapestries, sculptures and art works collected by Hearst during his lifetime.

During a tour of the west coast of the USA in 2008, I had the pleasure of touring the castle, amazed at the treasures Hearst collected during just one lifetime.

All images (unless otherwise stated) are taken from Hearst Castle - A Pictorial Tour Guide - a book I purchased at the end of the tour, as are most of the details. Some facts also come from edition.cnn.com and messynessychic.com.

The land was originally purchased by his Father in 1865 and converted into a working ranch. His Mother, Phoebe, who dubbed the property The Enchanted Hill, devoted much of her life to ensuring her son developed a deep appreciation for history and the arts. In 1873, accompanied by a private tutor, Phoebe and her 10-year-old son embarked on an 18-month grand tour of Europe.

After World Wars I and II, many European countries were in dire economic straits and sold many of their national treasures. Today, many laws are in place to protect items from leaving their home country.

At the time, W. R. Hearst became a regular customer of the major auction houses and it is said many items were purchased for a fraction of what we would expect to pay these days.

What we see at Hearst Castle today is a reflection of this early exposure to art, architecture and culture and W R Hearst’s tireless passion as a collector.

The courtyards are adorned with sculptures from Egypt; the pool is surrounded by Roman columns; the bedrooms have one-of-a-kind Art Deco ceilings from Spain and religious artefacts abound. Overall though, there is a strong leaning to the Gothic style.

Around 1920 Hearst engaged Julia Morgan as the architect to build a quiet California escape. Initially he had intended a modest building, as he was sick of taking friends to camp out on the grounds. It didn’t take long before it became a much grander project.

She worked hand-in-hand with Hearst designing and building the estate. Hearst himself spent time at the castle throughout its nearly 30-year construction, from 1919 until 1947. He died in 1951.

Join Josh and Amy on their tour of part of Hearst Castle, published on Youtube, below. At the end there is a link to a 2nd tour as well.

I am sure the short video clips have whetted your appetite to know more - so let's take a more detailed look at some of the fascinating aspects of this overwhelmingly opulent place.

Arriving at the hilltop, overlooking the valley, I was completely blown away by the Neptune pool (below) - the sparkling blue expanse of water surrounded by an ancient Greco-Roman Temple façade and modern colonnades. Neptune, the Roman God of the Sea, stands in the centre of the pediment, holding a trident in his right hand. It was rebuilt 3 times to meet Hearst's exacting standards and was just completely refurbished again a few years ago.

Casa Grande, the main house in Mediterranean Revival style was inspired by the Church of Santa María la Mayor, Ronda, Spain and forms the centrepiece of the estate, although it was the last house to be built. Its façade suggests a Spanish cathedral with its bell towers and ornate decorations. The main entrance is flanked by bas-reliefs of knights, and a sculpture of Mary holding the infant Jesus is perched in a niche over the massive door.

The grandeur continues inside as we view the Assembly Room, where guests would mingle while waiting for dinner to be served in the dining room next door. At 2,498 square feet, it is so big that there were phones placed at each end for guests to call across the room instead of walking across it.

This room is a treasure house of architectural features and art objects. There are four original C16th tapestries from the Deeds of Scipio Africanus series hanging on the walls. Some of the same tapestries are in the Louvre in Paris: I read that they are copies!

A former guide at Hearst Castle commented to CNN:

During the French Revolution, the set was broken up and sold. Today, only these four at San Simeon and a fragment of another from the set are known to still exist.

Some other treasures in this room (show below) include:

The Dining Hall (below), known as The Refectory (the term used for a dining room in a religious house or college) is equally resplendent. The ceiling has 15 lifesize panels, representing 12 saints, 2 coat of arms and the Virgin Mary.

The banners represent districts in Siena, Italy; while the silverware dates around the C18th and C19th, from England, Ireland, Belgium and Mexico.

Other rooms of note in Casa Grande include the Theatre - lined with scarlet damask and supported by gilded caryatids - it personifies Hollywood and often hosted movie stars like Cary Grant, Clark Gable, Charlie Chaplin, the Marx Brothers, Joan Crawford, Dolores del Rio, not to mention other famous people such as Calvin Coolidge, Winston Churchill, Charles Lindbergh and Howard Hughes - the list goes on. If only those walls could talk!

The Billiard Room has a 1400s Spanish ceiling, French mantel and doorways.

The Billiard Room is dominated by a Gothic Franco-Flemish tapestry (below) entitled Hunting Scene - from the late C15th or early C16th - one of a pair hung on the limestone walls - they are close to 10 feet high and over 14 feet wide.

Isn't is incredible the wealth of artefacts Hearst was able to collect?

It is unknown why Hearst chose a relatively modest bedroom (below) in Casa Grande - it might be for the ceiling, which is said to be one of the most important on the property - a C15th polychrome wood ceiling from Tereul, Spain, probably from the Palacio de los Sánchez Muñoz.

The Library (below) has more than 4000 rare volumes shelved beneath the coffered 16th, Spainsh Renaissance ceiling. Here also is one of the world's collections of Greek and Etruscan pottery dating from the 8th to 3rd centuries BC. The insert shows the lobby outside the Library with busts of 2 Renaissance noblemen.

The guest houses are equally opulent.

Casa del Monte (below) looks over the ridges of the Santa Lucia ranges. Built in C16th Renaissance style it contains a mere 10 rooms- including 4 bedrooms and bathrooms and a sitting room.

In the Sitting Room, ornate doorways are C16th Italian wood polychrome and gilded, while the marble bust on the mantel is the Grand Duke of Tuscany or possibly his father - C17th, Italian.

The bedroom shown contains the so-called Cardinal Richlieu bed is walnut and the headboard is carved with the coat of arms of a prelate of the Balbi family. Behind the bed is a Flemish armorial tapestry of a cardinal archbishop from the C17th.

Casa del Sol has 18 rooms on 3 levels, including 8 bedrooms. It is built in a southern Spanish Renaissance style with Moorish motifs.

The Sitting Room has antique doors from the French Cathedral in Oloron-Santa Maria. The portraits of a boy and a girl (not shown) are from the court of Phillip III of Spain.

The bedroom shown has a gilded bedstead with Persian patterns and a hanging silk Kashan rug.

Casa del Mar (below) also has 18 rooms on 3 levels and commands breathtaking views of the Pacific Ocean and San Simeon Bay.

In the Sitting Room, the fireplace mantel is grey stone, origin and date unknown. The ceiling is polychrome plaster and gilded, adapted from an antique celing in Granada, Spain.

The bedroom shown has Spanish C16th beds. The Bas-Relief over the mantel Madonna Adoring Christ Child with St Joseph is Florentine and dates from C15th.

The estate was home to the largest private zoo. Formally known as The Hearst Garden of Comparative Zoology, the zoo was meant to feel like a real safari, where guests could observe animals roaming free (or at least in an immense paddock) from every corner of the globe.

There were antelope, zebras and camels; exotic white deer, kangaroos, ostriches, giraffes – the list goes on.

It wasn’t uncommon for royal estates back in Europe to have menageries, but Hearst, like everything else, was taking it to whole new level. Amongst the enclosed animals were jaguars, bears, and tigers; lions, monkeys, exotic birds, and even an elephant.

The upkeep for such diverse animals was costly, however, and the Hearst disassembled the zoo in 1937. Traces of the old wild park can be seen today - over 100 zebras roam the grounds and the area’s elk are thought to be descendants from those of the 1930s.

The Roman indoor pool, as you can see below is yet another master piece. The hand-cut, hand-set glass tiles from Murano, Italy cover the walls. It took five years to do the tilework.

During construction, Julia Morgan was home recovering from a surgical procedure. Upon her return, she delivered some upsetting news to the tile workers.

No, tear it all out, we have to start all over again. It's too perfect.

So they stripped the Murano glass tiles off the wall and spread a new layer of thin-set mortar. Then, they went around and punched the walls with their fists so it looked like an ancient building that had settled. You can see the undulations, on the close-up below.

In the LA Times I read a 2009 article where three art works were found to be acquired by the Nazis and were repatriated to their original owners. The article goes on to say no other pieces at Hearst Castle are thought to have tainted origins. Already in 2003, staff members started the laborious process of vetting the entire collection as required by the American Assn. of Museums.

I think you will agree every room is filled with priceless treasures; however, it is quite overwhelming. It is said that at one point Hearst owned half of the world's art - after our brief visit you can see why!

Unlike many other magnificent mansions around the world, about 98% of all of the objects in the collection are on display, while the remaining 2% are being conserved, stored or loaned out to other institutions. It was opened to the public in 1958 and is now owned and operated by the California State Park system Around 700,000 people visit annually. My guide book makes the following statement:

History may never again record the story of a man whose enormous personal wealth and love of art objects permitted him to conceive, build and furnish a palatial estate the size and magnitude of which, at the time, rivalled anything constructed by kings, rulers or royal families.

Next week we head back to Europe and the land of the Tzars where the above statement will be put to the test! 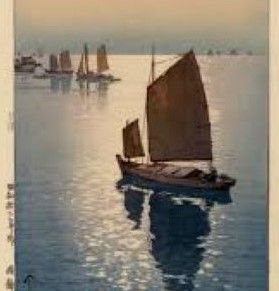 Today we look at how Hiroshi Yoshida's desire to learn and experience Western culture first hand led to him combining the French Impressionist style with traditional Japanese woodblock printing techniques to achieve his own unique print style. (Image: ukiyo-e.org)