St. Petersburg was the capital of the Russian Empire from its foundation in 1703 until 1918, the year in which Moscow became the capital. It has about 260 palaces. One of the most famous is Yusupov Palace – home of an important aristocratic family in imperial Russia.

Its last owner was the eccentric Prince Felix Yusupov, a high-society darling and at one time the richest man in Russia. In fact he owned 27 of the 260 palaces!

I had the privilege of visiting Russia on two occasions - the first in 2006 on a coach tour and the second in 2013 on a river cruise. It was a thrill to join a private tour of Yusupov Palace on my first trip.

Join me in visiting this beautiful, luxurious palace and learning of its fascinating, if somewhat gruesome history. Details below taken from lonelyplanet.com, russiau.com and my own notes.

The palace was built by Vallin de la Mothe in the 1770s, but the current interiors date from a century later, when it became the residence of the illustrious Yusupov family. As you can see above, they are sumptuous and rich. Many halls are painted in different styles and decked out with gilded chandeliers, silks, frescoes, tapestries and some fantastic furniture.

We knew we were in for a treat, climbing the sweeping Ceremonial Staircase (above) which gleams with white marble and adorned with statues, a magnificent chandelier, and intricate ceiling moulding. 1

The White Column Room is the banquet hall lined with a Corinthian colonnade, vaulted ceiling and carved architraves. At nearly 450 square metres in size, it is by far the palace’s biggest hall and was perfect for the splendid balls thrown by the noble family. 1

Each living room is executed in a different style.

The Red Living Room is richly decorated with deep red and gold and an elaborate parquet floor. 1

The Moorish Living Room stands in contrast to the distinctly European interiors of the palace’s other halls. It channels Islamic décor and architecture, with ornately carved arches and complex geometric patterns in brown, red, blue and gold - a reminder of the family's heritage, descendents of Sultan Yusuf, chief of the the Nogai Horde (a Mongol-Turkic tribal group). 1

The Musical Living Room (above) is light and airy, with gilded features and crystal chandeliers. The Yusupov family stored their violin collection here, including a priceless Stradivarius.1

While Moorish influences continue in the Moorish Drawing Room and Turkish Bath (below).

The Baroque Theatre (below) is a veritable jewel-box, with gilded motifs snaking around the walls, ceiling and stage, plush red curtains and carpets, and an enormous ceiling fresco. Concerts, opera, ballet and theatre performances are still held here today.1

Our tour guide mentioned that Pavlova had danced here.

We were then whisked off to the basement, where we learned of the legend that it was here, on 16 December 1916 Grigory Rasputin was murdered, a forerunner to the revolutionary events of 1917. In the eyes of Tsar Nicholas II and his wife Alexandra Fiodorovna, Rasputin (a Siberian peasant) was seen as a seer and miracle worker and the Tsar hoped to curry favour with the common people through this man.

However, those in royal circles and the aristocrats formed a conspiracy to assassinate this "holy man". Prince Felix Yusupov claims to have lured Rasputin to the basement and led the plotters in first poisoning, then shooting and beating Rasputin with clubs and throwing him into the icy Malaya Nevka River, where the "Mad Monk" eventually died of hypothermia.

A mockup with wax models of Rasuptin's last meal is set up in the basement of the Palace - an eerie place to hear this legend.

Join Vera, a delightful Russian guide, on a 6 minute tour, which includes a walk from St Issacs Cathedral to the Palace and more of the legend surrounding Rasputin's murder.

In 1914 Felix Yusupov gave over a part of the mansion to the soldiers wounded in World War I. He died in Paris in 1967 after going into exile in Paris where he wrote his memoirs and the sensational account of how Rasputin met his end.

The Yusupov family were strong supporters of the arts and the palace once housed more than 40,000 artworks (such as priceless paintings by Rembrandt). After it was nationalized in 1918, some of these were transferred to The Hermitage or to the Russian State Museum in St. Petersburg.

It was staggering to see the sumptuous rooms as they are today, let alone with a Stradivarius violin and the aforementioned 40,000 art works!

We remain in St Petersburg over the coming weeks, going back in time, from the city's birth to the height of its glory and that of the Russian Empire.

Our journey will cover a few fabulous palaces of Peter the Great, Empress Elizabeth and Catherine II the Great - their places in the Romanov dynasty is shown below. 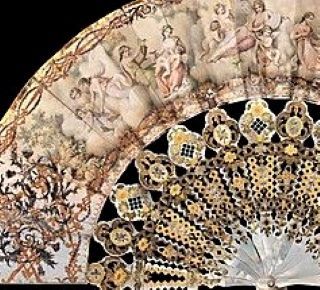 Today we learn how the artistry of the Japanese hand fan evolved to become a decorative, sought-after fashion accessory throughout Europe. Image: the Met Museum