Although you may not associate a royal tomb with a mansion, it is certainly a residence albeit for a dead pharoah to enjoy in the afterlife. Amongst the hundreds of tombs discovered in Egypt, King Tutankhamun's 3,000 year old tomb, remains the only one found to date which was not looted. An amazing discovery in 1922 which holds as much fascination to this day.

Although the building of the tomb is an engineering marvel, it is the contents of the burial chambers that make it worthy of the term "mansion".

In the 1890s George Herbert, the 5th Earl of Carnarvon, loved to race around in the newly invented automobile. But an auto accident in 1901 left him in ill health. Vulnerable to the damp English winter, Lord Carnarvon began spending winters in Egypt in 1903. To pass the time, he took up archaeology as a hobby.

Turning up nothing but a mummified cat (still in its coffin) in his first season, Lord Carnarvon decided to hire Howard Carter.

Carter had worked in Egypt for 31 years before he found King Tut's tomb. He had begun his career in Egypt at age 17, using his artistic talents to copy wall scenes and inscriptions. Eight years later (in 1899), Carter was appointed the Inspector-General of Monuments in Upper Egypt. In 1905, Carter resigned from this job and in 1907, went to work for Lord Carnarvon. (2)

Way back in 1988 I visited Egypt and the memories remain vivid to this day - the sheer age and magnificence of fascinating and awe inspiring items held in the Cairo museum are unsurpassed. I couldn’t believe security was almost non-existent and no air conditioning. Surprisingly windows were simply flung open to the noise and dust from the streets outside!

Below are some of my photos in the museum of King Tutankhamun's treasures.

After 6 years working in the Valley of the Kings, located near Luxor ie, Thebes, in ancient times, (the capital of Egypt), Lord Carnarvon told Carter he would only fund one more season - how very fortunate as it was in this year, 1922, that the tomb of King Tutankhamun was discovered.

I could not wait to sail down the Nile and visit this fabulous place; as you can see below, the landscape is desolate and hard to image such treasures could lie beneath.

On November 23, upon receiving a cable almost 4 weeks earlier, Lord Carnarvon and his daughter, Lady Evelyn Herbert arrived in Luxor. Tensions were high. There was evidence that tomb robbers had raided the tomb at least twice in antiquity. Carter wrote:

"With trembling hands I made a tiny breach in the upper left-hand corner. Darkness and blank space, as far as an iron testing-rod could reach, showed that whatever lay beyond was empty, and not filled like the passage we had just cleared.

Candle tests were applied as a precaution against possible foul gases, and then, widening the hold a little, I inserted the candle and peered in, Lord Carnarvon, Lady Evelyn… standing anxiously beside me to hear the verdict. At first I could see nothing, the hot air escaping from the chamber causing the candle flame to flicker, but presently, as my eyes grew accustomed to the light, details of the room within emerged slowly from the mist, strange animals, statues, and gold—everywhere the glint of gold. For the moment—an eternity it must have seemed to the others standing by—I was struck dumb with amazement, and when Lord Carnarvon, unable to stand the suspense any longer, inquired anxiously, Can you see anything? It was all I could do to get out the words, Yes, wonderful things. (2)

Wonderful things indeed - Approx 5000 artefacts – take a look for yourself...

...and a few examples shown below.

Sun Scarab pendant - The scarab god Khepera was depicted as pushing Ra’s sun on its course westward to sunset. The heart scarab was placed upon the heart region of the mummified corpse which it was believed to have been weighed against that of a feather of truth for admittance to the afterlife.
Perfume vessel - Alabaster containers were filled with rare and expensive unguents for his use in the afterlife. The interiors of some of the vessels are still marked with the fingerprints of the ancient grave robbers. The exteriors inscribed with the visage of the fertility god Hapti who was responsible for the essential annual Nile River floods.
Canopic Jars - Ancient Egypt had far advanced the funeral arts. They practiced embalming methods that led the world for millennia. The body’s viscera were removed in the process of readying the body for burial and put into clay or limestone jars. It was believed that the king would require these organs in the afterlife, and so were included in his burial chamber.(4)

Head of a leopard - The Pharaohs long admired the strength and beauty of the African leopard and imported the animals from the South of the continent.
Statue of Anubis - Anubis was the jackal which ushered the souls of the Egyptian dead into the underworld. Associated with the art of mummification, the canine was thought to be an effective guard for the grave.
Personal Fan - A fabulous gilded fan was included for King Tut’s exclusive use in the afterlife. This gold metal fan was inlaid with his personal royal cartouche.
(4)

The walls of the crypt were painted – however in comparison to many other tombs of Egyptian Kings, the details are simple and hurried. When the crypt was sealed, 3,000 year old mould indicated the paint was not properly dry; confirming views that the King died suddenly, at the tender age of around 19, after a reign of only 9 years (1332 to 1323 BCE).

Tutankhamun's sarcophagus (a box-like stone container) held not one but three coffins in which to hold the body of the pharoah. The outer two coffins were crafted in wood and covered in gold along with many semiprecious stones, such as lapis lazuli and turquoise. The inner coffin, however, was made of solid gold.

The death mask (below) is considered one of the masterpieces of Egyptian art. It originally rested directly on the shoulders of the mummy inside the innermost gold coffin. It is constructed of two sheets of gold that were hammered together and weighs 10.23 kg.

Tutankhamen is depicted wearing the striped nemes headdress (the striped head-cloth typically worn by pharaohs in ancient Egypt) with the goddesses Nekhbet and Wadjet depicted again protecting his brow. He also wears a false beard that further connects him to the image of a god as with the inner coffin.

He wears a broad collar, which ends in terminals shaped as falcon heads. The back of the mask is covered with Spell 151b from the Book of the Dead, which the Egyptians used as a road map for the afterlife. This particular spell protects the various limbs of Tutankhamun as he moves into the underworld.(6)

Lord Carnarvon died in 1923, but Howard Carter lived on to systematically catalog many of the artefacts. Scientists continue today to unravel the life and mysteries of this pharoah, apparently quite an insignificant one at the time of his reign, but known around the world today.

Recently I watched a 3-part special on some recent discoveries, as a new museum is opening soon in Cairo. It is no surprise that after 3,000 years some of the treasures need restoration! The presenter was shown some seeds found in the tomb – cardamom if I recall correctly - she could still smell their distinctive scent!

I was fortunate to visit the crypt of King Tutankhamen - in 1988 it was still possible - however these days the authorities are rightly more concerned with preservation than inviting tourists. The mummy of the pharoah is still located in the tomb. Egypt remains one of my favourite destinations and perhaps I will return some day.

For our next mansion, we will linger in antiquity – to a palace on the island of Crete. 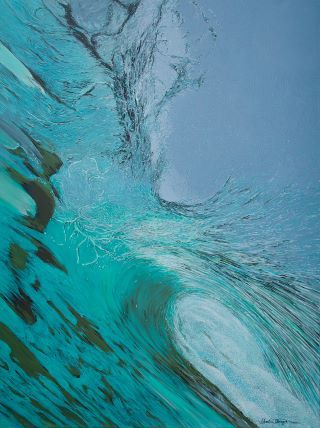 Ed Obermeyer is an artist and teacher from Virginia USA who uses his water and nature photography, and the experiences of his extensive travels to reflect beauty and movement in his inspiring paintings. Image: edobermeyer.com