Today's mailbag art work is a mural by Doris Emrick Lee (1905-1983), an American painter known for her figurative painting and printmaking. She won the Logan Medal of the Arts from the Chicago Art Institute in 1935. She is known as one of the most successful female artists of the Depression era in the United States. (en.wikipedia.org)

Until the turn of the twentieth century, the general store often functioned as a post office for rural communities. Even after the Post Office Department instituted Rural Free Delivery, the general store remained a cornerstone of the community and a hub of communication. In General Store and Post Office, Lee shows the store's behind-the-scenes workings on the left, while on the right she depicts the front of the store bustling with activity: a woman arrives at the postal window with her young daughter, who gestures towards a reward notice for the capture of a wanted criminal; behind them, a young woman waits to mail a letter; the aproned man at the counter sells various sundries; and to the right, a young farmer reads aloud to his neighbors from a newspaper sporting the headline "Farmers Organize." The open door at the far right reveals a gasoline pump, which at the time was still a fairly recent invention, just thirty years old, and alludes to the increased mobility of rural Americans during the 1930s.(en.wikipedia.org)

The mural is at the Ariel Rios Federal Building, Washington, D.C. and the photograph of this work was taken by Carol McKinney Highsmith (born Carol Louise McKinney on May 18, 1946), an American photographer, author, and publisher who has photographed in all the states of the United States, as well as the District of Columbia, and Puerto Rico. She photographs the entire American vista (including landscapes, architecture, urban and rural life, and people in their work environments) in all fifty U.S. states as a record of the early 21st century.(en.wikipedia.org)

Highsmith donated her life's work of more than 100,000 images, royalty-free, to the Library of Congress, which established a rare, one-person archive. (en.wikipedia.org)

The first item in our mailbag is to tell you a little about the Bungendore Wood Work Gallery (30 minute drive from Canberra) that Jane and I visited in February with Trevor of Canberra some weeks back when life was a little more normal.

For anyone who loves wood (as do I) the gallery has an amazing collection of furniture especially tables. Also beautiful boxes, other small wooden ornaments and other household objects.

If you like looking at beautiful woodwork check out the Bungendore Wood Work Gallery shop and maybe treat yourself to a little gift.

While we were at Bungendore Trevor told us all about The Hannah Cabinet which was on display in the Bungendore Wood Work gallery between 2013 and 2017. Sadly we missed seeing this incredible work of art but Trevor has provided me with a beautiful brochure and DVD and tomorrow I will showcase this work of art for you as it deserves a post all of its own.

From E in London we have two glorious early morning photographs of Regents Park. Can you spot the daffodils?

And back to the other side of the world from D in Bendigo an on-line tour of the magnificent Fortuna Villa in Bendigo. There is a little story or two about this beautiful mansion - considered to be the best in Bendigo. The property was bought in 1871 by mining entrepreneur George Lansell, and he spared no expense in its expansion and embellishment to accommodate his second wife Edith and their six children. But no-one knows that George Lansell borrowed the 400 pounds from my great grandfather William Lunn to purchase the house so in our family we think we have made a special contribution to the property.

Sadly I was to attend a 100th birthday celebration at Fortuna Villa a couple of weeks ago. Unfortunately it has had to be postponed but in the meantime you can take a little virtual tour around this grand mansion.

As Fortuna Villa has had to close under the present social distancing conditions, the owner (Paul Banks) decided to make a set of videos to take us on a personal tour of the mansion. There are ten videos in all and I will show you a few each mailbag day. Paul Banks refers from time to time to the military days which referes to the time when Fortuna was home to the Army Survey Regiment and the Australian Headquarters for the Cartographic Unit. 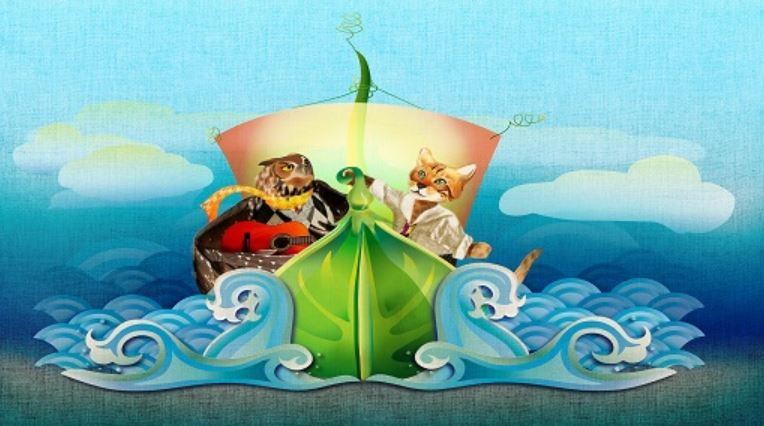 The Owl and the Pussycat was written by Edward Lear (1812–1888) an illustrator, natural history artist, and writer, best known for his nonsense poems. A Book of Nonsense, was published in 1846 and helped to popularize the limerick, a humorous form of verse. Photo credit: sunshinecoast.qld.gov.au