There is no doubt that Aussies love cars. I would go as far as to say the most are welded to the seat of their favourite vehicle. The nature of the Australian landscape and the long straight roads encourages driving for hours without having to turn the steering wheel. When I was young I lived in Darwin in the Northern Territory for a year and when returning home to Victoria all I had to do was drive south for approximately 3000 kms (without turning the wheels) and then turn left!

Australian artist Ben Quilty (if you read yesterday's Past Posts you would have met Ben) has researched and explored the love affairs Australians have with their cars. In fact his career as a painter was launched in 2003 with a series of paintings of his 1972 Torana. Painted in dense slabs of colour deftly applied with a palette knife, they paid tribute to the role of the first car in a young Australian’s life.1

Van Rorschach (above) isn't the vehicle you would expect: the painting is of a Japanese minivan- the type of vehicle you might borrow if you were moving apartments when you were 19 years old.

I will let Ben Quilty do the honours and explain to you directly how and why he created Van Rorschach.

The Museum of Contemporary Art Australia also provides an explanation of the Van Rorschach painting to help you further your understanding.

Buying and driving the first car is one of the few rites of initiation into adulthood presented by modern secular society, and it is one that Quilty returned to two years later in Van Rorschach. In this diptych, Quilty paints his van – the vehicle he drove everyday – as a kind of self-portrait. In this and other works, the car is an extension of self that reflects its owner and how they want to be perceived. Quilty’s paintings of his cars and those of his mates are in effect portraits of their owners – young men for whom a set of wheels and a slab of beer is a passport to youthful freedom, often enjoyed to excess. In other works, Quilty has painted the wreckage of car crashes – the consequences of the adolescent obsession with risk-taking that characterised his own youth.

The theme of ‘boys behaving badly’ that Quilty pursues in his car paintings is an exploration of an Australian form of masculinity founded on fast driving and destructive drinking sessions within a tight circle of mateship. The exuberant confidence and rough impatience of that culture is expressed through dense slabs of paint in Van Rorschach, which were applied quickly and thickly with a palette knife, like mortar or render. Working like a tradesman, using caulking guns of paint and the knife like a trowel, Quilty paints his ordinary and utilitarian van as an extension of himself and as a marker of a masculinity that identifies itself with the beer-drinking, car-loving, working-class bloke from the suburbs. While this could be construed as an exercise in anti-intellectualism that celebrates the cliché of the boorish Australian ‘yobbo’, Quilty’s car portraits are an individuated and self-reflective view of his experience that questions, rather than glorifies, the particular rites and rituals that marked his passage into adulthood. 1

This painting is the seminal work to Ben Quilty's paintings (both portraits and landscapes) created using his Rorschach Style. 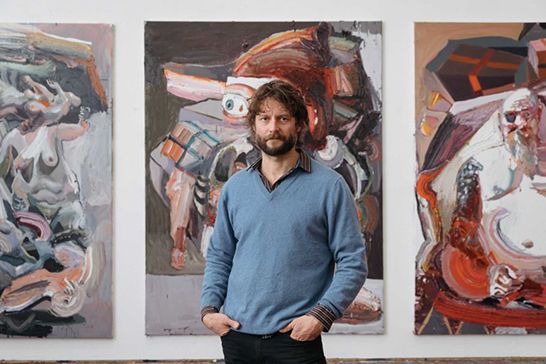 Our past posts today showcase some of the works of the remarkable Australian artist Ben Quilty. You will see portraits of war heroes, learn about Rorschach portraits & landscapes. Image: Ben Quilty (abc.net.au)