Blog supporter Vincent has alerted me to the death of Sigmund Jorgensen. Most of you will not know this name but the Jorgensen family played a significant role in the development of Melbourne's Art World. In 1934 Sigmund's father Justus Jorgensen (below) and his partner Lillian Smith, established an artist's colony in Eltham, an outer Eastern suburb of Melbourne. 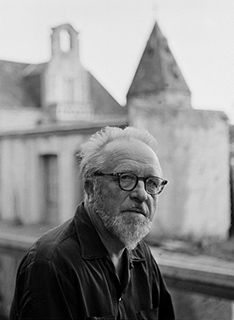 Originally Montsalvat was built for Justus Jorgensen and his family but many artists, artisans and intellectuals were attracted to the beautiful environment over the years, including Clifton Pugh, Betty Roland, Leonard French, Helen Lempriere and Albert Tucker and an artists' colony was formed.

Sigmund Jorgensen was born at Monsalvat and ran the artists' colony from 1969 to 2005. 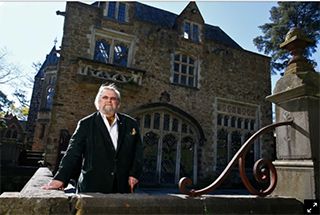 The article by Kerrie O'Brien in the Sydney Morning Herald (22 July 2019) gives a very good description of life in the Montsalvat Artists' Colony.

It was a welcoming space for artists in a conservative era and renowned for its open ideas. Sigmund and his brother, Sebastian, are the children of Justus and colony member Helen Skipper. Lily James and Jorgensen senior remained married and reportedly dined together with Skipper each night, much to the chagrin of the less liberal-minded.

What made Montsalvat unique was magic and madness, Sigmund once said. He believed it had had a particular resonance with the community because it was accessible and friendly.

Sigmund took over the running of Montsalvat in 1969, when it had fallen into disrepair and was in financial trouble. As general manager, he was pivotal in rebuilding it and oversaw the completion of many of its buildings and initiated others, including the restaurant.

He continued to work for Montsalvat for 45 years and wrote an acclaimed book about growing up there. In 2014, he claimed he was dismissed from his role by email, a claim countered by the then board, who said his role was discontinued.

He ran for State Parliament and went on to become a local councillor and was the mayor of the Nillumbik Shire for a time. He was awarded an OAM in 2013 for his services to arts and culture.

The Montsalvat buildings are beautiful and are a popular location for weddings. I particularly like the scenes around the swimming pool.

Currently Montsalvat's grounds and buildings are mostly used for exhibitions, performances, conferences, seminars, weddings and receptions; however, many artists (such as luthiers, jewellers, painters,glass artists, ceramicists, textile artists, sculptors and a writer) continue to reside in Montsalvat. Several classes on various disciplines of art are offered year round by the resident artists.(Wikipedia)

The Nazca Lines are geoglyphs located in the Nazca Desert in southern Peru, that cover an estimated 450 square kilometers and now a World Heritage Site. Scratched on the ground, they number in the thousands and depict creatures from both the natural world and the human imagination.