Following on from yesterday, the Chinese have also developed a form of Rice Paddy Art - not to be outdone, theirs is in 3D form. Again the aim is to attract tourists - I was not able to determine if the Chinese copied the Japanese or the other way around!

Rice farmers in China's northeast province of Liaoning carefully plant their harvest to create vast 3D works of art that are both eye-catching displays of contemporary and traditional subjects. These plant-based pieces are so intricate that they look to be spray-painted onto the fields.

In reality, the spectacular designs are planned out ahead of time, utilizing rice saplings that grow to be different heights and colors. Knowing the growth patterns of each species of the crops allows farmers to form beautiful images of detailed scenes, animals, and classic Chinese deities, months in advance.

The aim is to entice tourists to vist this region, however it is also home to a Chinese ethnic group known as the Sibe people, for whom it is customary to produce rice field art to pray for blessings, these meticulously plotted fields of rice paddy art are actually part of a unique theme park in Shenyang, China.

The unconventional amusement park, which takes up a total of 25 acres, is one of the largest canvases for rice paddy art in the world, and the park itself is actually named after the movie Inception, which translates as “space of rice dreams” in Chinese.1

A traditional design, like the one below, includes a close-up on the right hand side to display the intricate detail.

While others are more whimiscal, perhaps the one of the left is Little Bo Peep? The mural on the right is an excellent example of the 3D effect.

However I think India has the longer tradition in designing vibrant patterns, using colored dry or wet rice and dry flour, created on the ground.

This long-standing folk art is known as Rangoli (or kolam or Muggu). The bright designs are usually made during auspicious events like Diwali, Onam, Pongal, and other Indian festivals as well as wedding celebrations, and their presence is considered sacred welcoming areas for the Hindu deities.

Rangoli is meant as decoration and thought to bring good luck. The images are often geometric shapes, deity impressions, or of flowers and petals.

To craft this incredible tradition, artists use a base material of dry or wet granulated rice, or dry flour. It's colored using sindoor (vermilion), haldi (turmeric), or other natural pigments; the vibrant blues, purples, and teals are all chemically enhanced and considered a modern variation. Flower petals and sand are also used in rangoli designs, adding to the richness and diversity that's possible with this art.1

Below images show the colours being prepared, along with one of the Rangoli, which is shown again in close-up.

Below you can see some of the elaborate designs painstakingly crafted with the help of many people, resulting in spectacular artworks that are awe-inspiring in detail and skill.

My favourites are the cute animals incorporated in the designs shown below.

What is your favoutie? The huge expanse of Japanese Rice Paddy Art we featured yesterday, the Chinese 3D patterns or the Indian street murals, which certainly win the prize for being the most colourful. 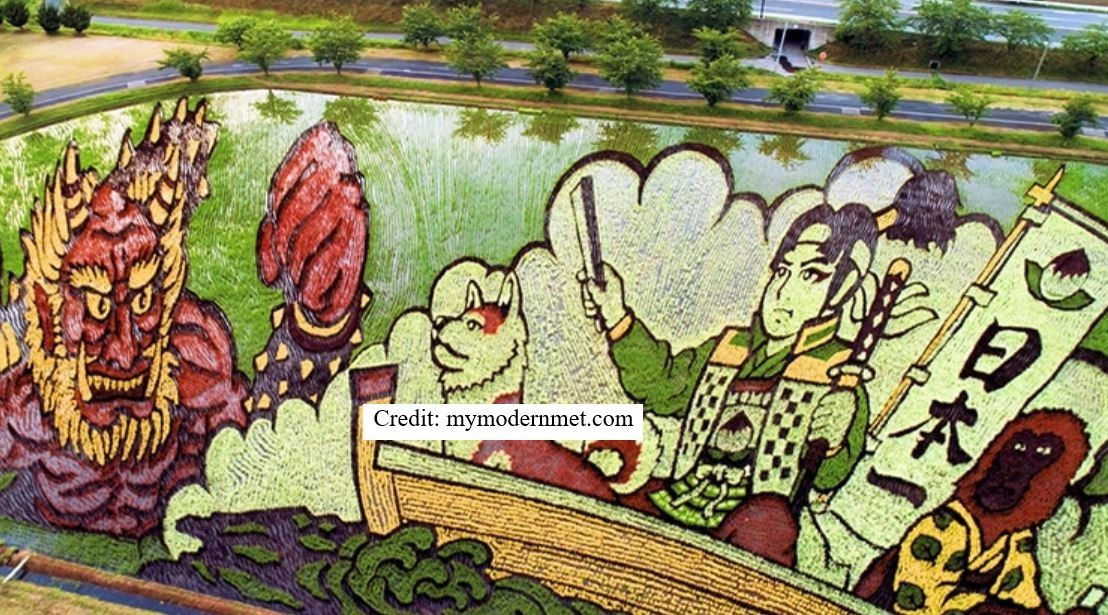 Japanese Rice Paddy Art - each work a 15,000-square-meter mural designed and created in the Japanese village Inakadate, made up of, up to 7 different types of rice, often depicting local heritage and folklore.