I have been introduced to Nat Buchanan through my friendship with John Pickup who is the last surviving Brushman of the Bush and one of Australia's best artists for capturing the essential character of the Australian outback. But who was Nathaniel Buchanan and what was it about this man that captured the interest of John Pickup?

Nathaniel Buchanan (1826-1901) was an Australian pastoralist, drover and explorer who opened up many of the stock routes. Born in Dublin of Scottish descent he came to Australia with his parents in 1832 and as a young man was part owner with his two brothers of Bald Blair station. In 1850 the brothers went to the California Gold Rush but when they returned to Australia... their station had been mismanaged and lost in their absence. (Wikipedia) 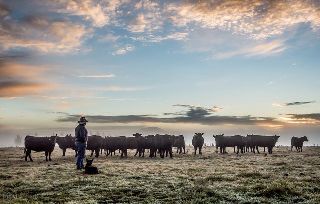 But 170 years ago Nat Buchanan set off as an overlander, the name given to the drovers who covered long distances across Australia opening up the new country.

Nat at first explored the tributaries of the Fitzoy River, Queensland and once more became an owner, this time of Bowen Downs Station, Central Queensland. Nat abandoned his share in 1867 but I have found a photo of the station taken in 1875. 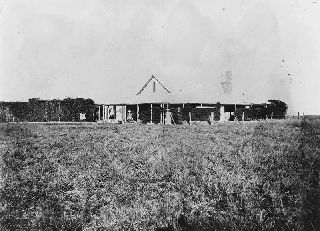 (Credit: Pioneers of Australia from 1875)

Nat Buchanan is best remembred for two things. First, he was one of the early pioneers who opened up the Australian countryside in the north to allow cattle to be moved in search of food. Stock routes crisscross much of Australia but only three have achieved legendary status – the Canning, the Birdsville and the Murranji. 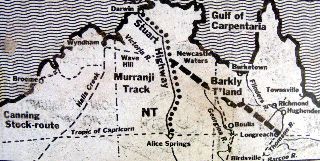 Buchanan pioneered the Murranji Stock Route (also known as The Ghost Road of the Drovers) in 1881 which cut off 600 km from the trip from Queensland to the Kimberley in North Western Australia. Although relatively short by Australian standards ( only 250 km long) the Murranji Stock Route is considered to be one of the most difficult stock routes to negotiate. (Wikipedia)

The Barkly Stock Route in the Northern Territory was also pioneered by Nat Buchanan and is known for the epic cattle drives of the past that passed through the area en route to Queensland. Today this is a road known as the Overlander’s Way (Barkly Highway) and is used by great road trains and visitors.

Route 80 is a highway named in honour of Nat Buchanan which travels from the Stuart Highway near Dunmarra, west via Top Springs and Victoria River Downs, to the Victoria Highway near Timber Creek. Both the photos below come from ozroads.com.au. 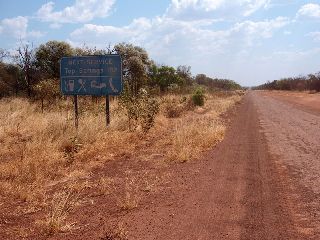 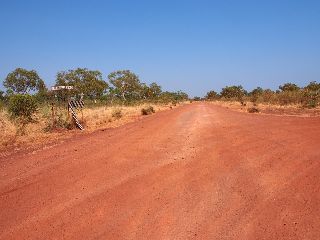 But Nat Buchanan was also known for another distinguishing feature apart from his remarkable courage and knowledge of the Australian desert. As a red headed Scot with very fair skin Nat was at the peril of the blazing Australian sun which is now giving Australia the name for the country with the highest incidence of skin cancer. Nat Buchanan must have known a thing or two because he rode his horse holding an umbrella over his body for protection!

John Pickup painted an inspiring series of paintings commemorating not only the contribution Nat Buchanan made to opening up this beautiful but vast and torrid land but also to the significance of the umbrella as protector against the elements. In John Pickup's interpretation the umbrella remains almost the sole reminder of this great pioneer. Occasionally you will see a red headed Scot gazing down on a herd of cattle and the drovers that helped make this dramatic country so wonderful.

Now please take a little time to absorb the colours and textures used by John Pickup to create a sense of mystical timelessness in this rugged and unforgiving ancient landscape. Look at the remarkable cloud formations, sisters in arms with the treacherous ground. And above all else the blue umbrella and lone riderless horse symbolising that there is a story here to be heard and a spirit to be felt.

If you are new to my blog you might want to check back to see some earlier posts where I showcased works by John Pickup. Please follow these links.
John Pickup says reports of my demise are premature and unfounded
John Pickup brings Don Quixote to the Australian Outback
How to paint clouds
John Pickup I love a sunburnt country of drought and flooding rains
John Pickup water and much, much more
John Pickup leads us into colour
Being brave with colour

Bhaktapur, one of the 3 Malla kingdoms in Kathmandu valley - Nepal’s capital between 12th-15th centuries. Until the devastating earthquake in 2015, the best preserved. The city developed to service the old trade route between Tibet and India. Hotel Heritage. Rana palaces