A couple of weeks ago I introduced you to marine artist Robert Carter and planted a teaser in the blog that Robert had a strong connection to Marieham in the Aland Islands off Finland. Today I can reveal that in 1999 he was commissioned by the Aland Post in Finland to paint a picture for a stamp to commemorate the 50th anniversary of the last commercial grain race by Pamir and Passat between Port Victoria, Australia and Europe. (robertcarter.com.au)

I believe that Robert had early in his life, in April 1947, tried to sign on as crew on the four masted barque Pamir when it was in Sydney two years before its final voyage. Unfortunately for Robert she already had a full crew. So Robert turned to painting the Pamir instead. 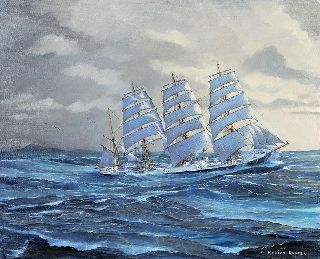 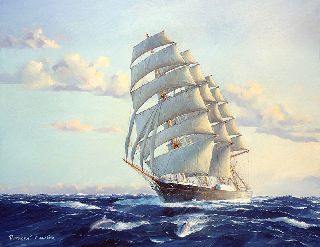 The stamp was subsequently voted the best stamp of the year.

From my research on Robert Carter and his knowledge of sailing ships (he is much more than an artist) I have learnt that most of the last sailing ships came from Mariehamn in the Aland Islands off Finland and the voyage by the Pamir and Passat, as commemorated in Robert's stamp, also commemorated that last voyage by a commercial sailing ship around Cape Horn to the UK.

Cape Horn is the southernmost headland of the Tierra del Fuego archipelago of southern Chile, and is located on the small Hornos Island. Although not the most southerly point of South America (which are the Diego Ramírez Islands), Cape Horn marks the northern boundary of the Drake Passage and marks where the Atlantic and Pacific Oceans meet.

Cape Horn was discovered and first rounded in 1616 by the Dutchman Willem Schouten, who named it Kaap Hoorn after the city of Hoorn in the Netherlands. This fact fits very nicely in with our Touch of Dutch we had also a couple of weeks ago.

For decades, Cape Horn was a major milestone on the clipper route, by which sailing ships carried trade around the world. The waters around Cape Horn are particularly hazardous, owing to strong winds, large waves, strong currents and icebergs; these dangers have made it notorious as a sailors' graveyard.

The need for boats and ships to round Cape Horn was greatly reduced by the opening of the Panama Canal in August 1914. However, sailing around the Cape Horn is still widely regarded as one of the major challenges in yachting. (Wikipedia)

The English poet John Masefield (1878-1967) is known for his sea poetry and rounded The Cape a couple of times during his short career as a merchant marine. Masefield, in his narrative poem Dauber included a poem, Rouding the Horn which describes the experience most graphically.

We will return very soon to the nautical poems of John Masefield especially as the Dauber in his narrative poem was a young artist.

Back to Robert Carter and his experience with Cape Horn and the Windjammers.

To assist in his research into the last commercial sailing ships Robert Carter became a member of the Australian Cape Horners Association (AICH) and was secretary for many years. This experience brought him into contact with the last living men and women from around the world, to round Cape Horn in a commercial sailing ship. As a result he has written a book titled Windjammers – The Final Story, a collection of stories and anecdotes from contact and interviews with these last living windjammer sailors. In 1995 Robert was awarded the prestigious St. Malo medal by the International Association of Cape Horners in France, for his contribution in recording and illustrating the existence of the commercial sailing ship in its final years.In 1996 he founded the Australian Society of Marine Artists.
(marineartistsaustralia.com.au)

The perils faced by those that went to sea extended far past fighting the will of the ocean. Below is Robert Carter's painting of the full-rigged ship Monkbarns being moved up to a buoy in the Thames in 1926 at the end of the last commercial voyage that she would make. (robertcarter.com.au)

In Robert Carter's book Windjammers – The Final Story, there is a description of the last hours of this voyage given by a Monkbarns seaman, Dudley Turner to Robert Carter.

Monkbarns had been away on a nomadic voyage that saw her load coal in Newcastle, New South Wales three times for Chile and load guano or nitrates for the return trip. She led the tramping life of a typical lime-juicer+ except she was embayed in floe-ice south of Cape Horn, which held her captive for three months. She must have sailed well to the south in order to get a good slant up to westward to get around round Cape Horn.

On 21 January 1926 Monkbarns left Callao for the UK with a full load of guano. After rounding Cape Horn her master, Captain Davies, became ill and the Mate took over command. He put into Rio de Janeiro and the Captain was taken to hospital, where he died on 21 March 1926. The Mate was given command for the last leg to London. (robertcarter.com.au)

So called because British sailors were required by law to drink lime juice to ward off scurvy yet another threat faced by the early seamen.

There is so much to show you, so much to say about Sailing Ships especially as captured on canvas by Robert Carter. I will be back tomorrow with more. But in the meantime I want to share another poem about the seafarers - this one Robert has included in his remarkable book Windjamers: The Final Story.

The poem is inscribed in Spanish on a tablet near the monument which the International Association of Cape Horners (AICH), in collaboration with the Government of Chile, has erected on the peak of Cape Horn, in memory of the thousands of sailing ship mariners who in the pursuit of their calling have made this rounding and of those who lost their lives in the attempt. (Windjammers: The Final Story by Robert Carter)

Nicholas Roerich-a Russian painter, writer, archaeologist, theosophist, philosopher, & public figure of Baltic German descent, who in his youth was influenced by a movement in Russian society around the spiritual. His paintings are said to have hypnotic expression.