Not surprisingly, considering Australia was largely founded on the back of a sheep, just about every Australian loves the romatic image of shearing as created by the painter Tom Roberts (1856-1931). His painting Shearing the Rams (above) would have to be one of Australia's best known and favourite paintings.

It depicts sheep shearers plying their trade in a timber shearing shed. Distinctly Australian in character, the painting is a celebration of pastoral life and work, especially "strong, masculine labour", and recognises the role that the wool industry played in the development of the country.1

Tom Roberts’s Shearing the rams is a response to the nationalistic sentiment that developed in Australia during the late nineteenth century. It reflects the emergence of a national identity defined through heroic rural activity and the economic importance of the wool industry. The iconic painting is based on a number of preliminary sketches Roberts completed on the spot at Brocklesby Station, Corowa, New South Wales, in the late spring of 1888. He returned during the following two spring periods (shearing season) to work on the painting. Once completed, the work was exhibited in the artist’s studio in Collins Street, Melbourne.

Roberts set up his easel in the empty woolshed at Brocklesby Station, and paid young Susan Bourne (the model for the tar 'boy') and her sister sixpence apiece to kick up the dust so he could recapture the atmosphere of shearing time. What immediately impresses is the work's evident vivid realism, the snapshot, photographic composition. Convincing details, such as the sunlit gold of the bottles of oil for the whetstones, a pair of shears propped against a wall, and a tobacco pipe stuck in a man’s trousers, give the picture a real ring of truth. 2

It was of course natural that Australia's first industry would involve sheep as the European settlement of the country was made by people from Britain where sheep farming has formed an essential part of rural life and economy since the earliest times.

The young Tom Roberts grew up in his ancestoral land of Dorset, no doubt surrounded by sheep, before migrating to Australia with his family at 12 following the death of his father who was editor of the Dorset County Chronicle. Tom would have seen many scenes similar to the one shown below which is not set in Dorset by rather Woburn, Bedfordshire, UK.

This image which is in the National Portrait Gallery (Canberra) is of the annual agricultural fair at Woburn Abbey and comprises some 88 portraits, including several of eminent Englishmen of the day. It is a wonderful image and if you study it carefully you will discover some gems of creativity which we don't always associate with sheep!

Sitting in the lower right corner, observing shearing, a merino nearby, is Joseph Banks KCB (1743–1820), who was well into his 42 years as president of the Royal Society at the time. As a young naturalist, Banks sailed with James Cook on the Endeavour. Later, he was very interested in the development of superior sheep breeds and pasture, and it is largely because of Banks’s personal enthusiasm that merino sheep were established in Australia within a couple of decades of colonisation.

Coinciding with the merino’s rise to the attention of British farmers was the annual agricultural show at Woburn, initiated by Francis Russell, the fifth Duke of Bedford, in 1797. His model farm was a hub for experiments in cattle breeding, but leading figures from the agricultural world, landowners and farmers flocked to Woburn to evaluate various breeds of sheep at the fair, too, along with machinery – ploughs, drills, shears - and other agricultural innovations. Shearing demonstrations went on over several days, as did banquets, hunts and other entertainments. Having carried it on for some years, the sixth Duke of Bedford discontinued the expensive fair in 1821.

This is a hand-coloured print made after George Garrard’s painting The Woburn Sheep Shearing 1804 (which is in the Bedford collection at Woburn Abbey). The key to the print notes the participation of Arthur Young, Secretary to the Board of Agriculture, Sir John Sinclair, President of the Board of Agriculture, Sir Joseph Banks, Thomas Coke MP, and other notable figures including Sir Humphry Davy.

Called a ‘masterpiece of meticulosity’ by GE Fussell in 1949, the print teems with interesting details, amongst them the plaster models of animals amongst the children at lower left – presumably the artist’s allusion to his own modelling practice. There are various sheep and cattle breeds pictured, including the merino (identified by the historian of domestication, Juliet Clutton Brock, in 1976). 4

Several of the AnArt4Life blog subscribers and supporters have an interest in the artistic merits and challenges of sheep shearing and the sheds where it all happens. Tomorrow we are going to review their contributions to this topic. 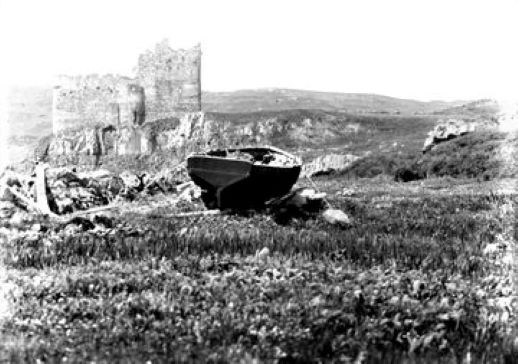 Today we will look at the life and beautiful photography of MEM Donaldson, who recorded the rugged beauty, harshness yet simplicity of life in the Scottish Highlands, 100 years ago. Image: ambaile.org.uk