When talking to people from places outside Australia, they often say I would love to come to Australia to see, the Great Barrier Reef, Uluru, the Opera House and many also would like to see our amazing fauna like a kangaroo or a koala so different to animals elsewhere.

Following on from the blog of the uplifting story of Anwen the koala being released into the wild after rehabilitating following the bushfires, we are going to look at koalas in detail. To help, I am using information and pictures from The Department of Environment and Science – Queensland Government (unless otherwise credited) interspersed with paintings by Australian painter Pixie O’Harris who we featured previously.Refer link /pixie-o-harris-and-the-missing-paintings/

The word koala is said to come from the Dharug peoples (whose traditional lands span the area from Parramatta to the Blue Mountains of New South Wales) word meaning ‘no water’.

Koalas are often referred to incorrectly as koala bears however, they are classified as a type of mammal called marsupials, which give birth to underdeveloped young. They are so different from any other marsupial, however, that they have been classified into their own family, called Phascolarctidae. They share a number of characteristics with wombats, who are their closest living relatives, including a backward-facing pouch.

Koalas are well-known for their large round head, big furry ears and big black nose. Their fur is usually grey-brown in colour with white fur on the chest, inner arms, ears and bottom. They have no fur on their nose or the palms of their paws. Koalas have particularly hard bottoms, which is similar to their closest relative, the wombat. For the koala, this feature enables them to wedge comfortably in tree forks for long periods of time, whereas the wombat uses its hard bottom as a defence mechanism.

Koalas have strong arms, powerful legs and sharp claws suitable for climbing trees. Koalas are arboreal (tree dwelling) mammals. When koalas are on the ground, they walk slowly as they are poorly adapted to walking on the ground, however when disturbed koalas can break into a bounding gallop, moving at speeds of up to 30km per hour.

They have two opposable thumbs on their fore paws, allowing them a better grip —essential for climbing smooth barked gum trees. When climbing, koalas leave behind characteristic scratches in the bark, which remain visible until the bark is shed each year, allowing you to gauge how frequently koalas use that particular tree. Stringybark trees that have been regularly climbed by koalas will also have the outer layer of weathered bark scratched away, exposing the fresh layer beneath.

Koalas eat a variety of eucalypt leaves and a few other related tree species, including lophostemon, melaleuca and corymbia species (such as brush box, paperbark and bloodwood trees). They consume around 500 grams of leaves each day, (approximately the size of a small lettuce) and obtain most of their water requirements from the leaves, which can contain up to 50% water. This removes the need for a koala to climb down a tree for a drink of water, except during very hot or dry periods. The leaves are also very low in energy comprising only 5% sugars and starches on average.

Eucalypt leaves contain many toxic compounds similar to that of cyanide, which most animals cannot eat. This unique diet is shared only with possum and gliders, and provides koalas with access to a relatively untapped food resource. Koalas are able to break down the toxic oils using a specialised digestive system with the help of specialised bacteria.

Koalas are not born with these bacteria in their system and need to acquire it from their mother when they are young. The mother passes on these bacteria by excreting a substance called ‘pap’, which the young ingests instinctively, providing it with the bacteria it needs to eat the leaves in adult life.

Koalas can sleep for up to 20 hours a day, due to their low energy diet, and the intense amount of energy required to break down toxic leaves.
Koalas are mostly active at night (nocturnal) and around dawn and dusk. However, they can be seen moving during the day if they are disturbed, get too hot or cold, or need to find a new tree.

The gestation period of a female koala is 35 days, after which she gives birth to a single joey. Female koalas are also capable of giving birth to twins, however this is quite rare. Birth usually take place between the months of November and February. The young stays in the pouch for the next six months before emerging for the first time. The joey will then spend between six and 12 months riding on its mother's back.

On average, koalas live for 10 to 12 years of age in the wild. Although females can continue to breed into their 'teens' and may live as long as 18 years; males are thought to have a slightly shorter lifespan.

We will leave you with some Australian postage stamps featuring the Koala through the decades. 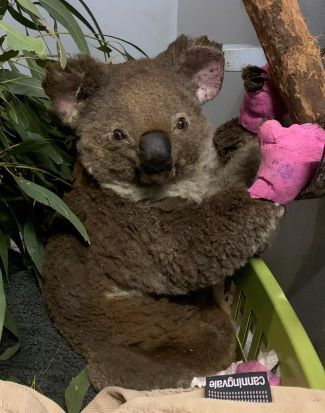 Anwen who was one of the first female koalas brought into the Koala Hospital as a result of the devastating bushfires which ravaged the Mid North Coast of New South Wales and many other parts of Australia.