When we were growing up we didn’t read much Winnie the Pooh; it might be because our Mother used to make up stories of wonderful characters with funny Dutch names. Invariably there would be a moral to the story, often related to our misdemeanours of the day, not coming home from our friends on time, not completing our homework etc..….hearing these stories were far more fun than reading.

So, I might recap a little for others who are not so familiar with the much-loved character. 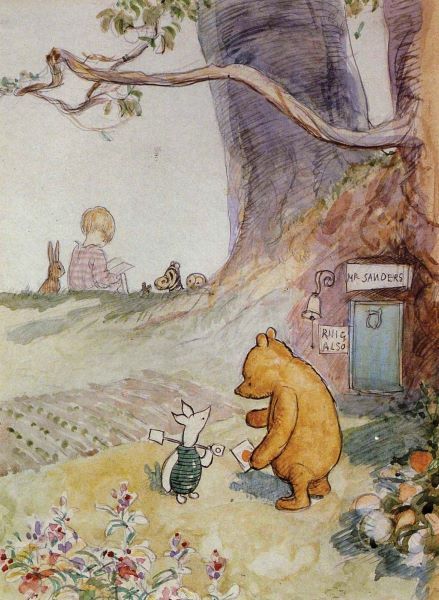 Cathy Lowne writes in the Encyclopedia Britannica: “Winnie-the-Pooh, a collection of children’s stories by A.A. Milne, published in 1926. Milne wrote the episodic stories of Winnie-the-Pooh and its sequel, The House at Pooh Corner (1928), for his young son, Christopher Robin, whose toy animals were the basis for many of the characters and whose name was used for the young boy who appears in the tales as the benign master of the animals.

The main character, Winnie-the-Pooh (sometimes called simply Pooh or Edward Bear), is a good-natured, yellow-furred, honey-loving bear who lives in the Forest surrounding the Hundred Acre Wood (modeled after Ashdown Forest in East Sussex, England). His companions are Eeyore, a gloomy gray donkey; Piglet, a timid pig; Owl, a pontificating bird; the meddlesome Rabbit; and Kanga, an energetic kangaroo whose inquisitive baby, Roo, lives in her pouch.

The stories are simply written, to appeal to young readers, and full of comic moments as well as silly verses. However, the work also is notable for its insights into human behaviour, and Milne’s characters are endearing but also complex. E.H. Shepard’s original illustrations add to the charm of the book and helped make it a children’s classic.” 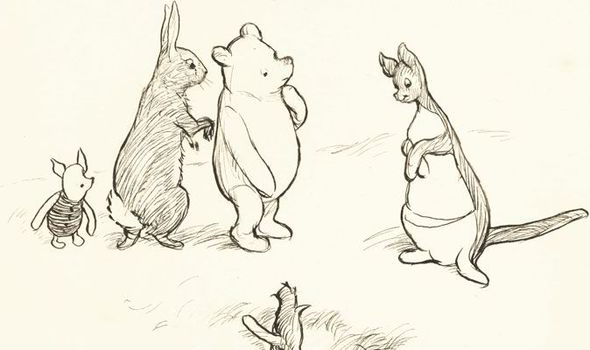 More modern versions have not lost the charm.

In 1966, Walt Disney produced the movie Winnie Pooh and the Honey Tree after hearing his daughter laughing when reading the stories

On the 18th January, National Winnie the Pooh day is celebrated in honour of Milne's birthday in 1882.

This year the FBI posted on their Facebook page on National Winnie the Pooh day a plea: “Help the FBI find Ernest H. Shepard's stolen watercolor featuring the most famous bear in the Hundred Acre Woods” with a picture link to their National Stolen Art File.

So if you have any information on this painting which is only is 4.5 inches tall by 2.6 inches wide of Winnie the Pooh in front of the mirror, get in touch with the FBI via their tip line. They along with many fans would love to hear from you.

If you would like more information about Winnie the Pooh and his friends check out this link to a previous blog which has an interesting article on How Winnie the Pooh’s illustrator helped A.A. Milne draw out the bear we all know.

Showcasing ice sculptures by Brazilian street artist Nele Azevedo, and including a video on how to make an ice sculpture by Shintaro Okamoto.