A couple of weeks ago in our inaugural Art News Picks we alerted you to news concerning the discovery of a stolen Gustav Klimt painting.

Today, thanks to Caroline we can conclude the wonderful story of the stolen Gustav Klimt painting which has been missing for 22 years after police said thieves had used a fishing line to steal it from the Ricci Oddi Gallery in the northern Italian city of Piacenza.

The painting was discovered in December 2019 hidden in the wall of the gallery. Workers were clearing the ivy back from the wall and discovered a small trap door which when opened revealed a plastic rubbish bag containing the $AU96 Million painting. 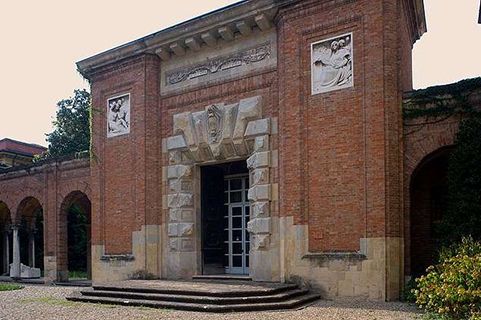 Of course, the next step was to prove that the painting was in fact the missing painting and a genuine Klimt. Here is the painting in question. 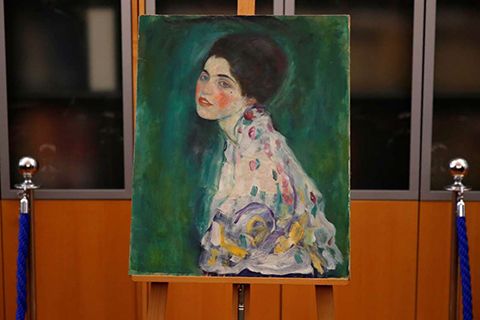 Gustav Klimt painted Portrait of a Lady between 1916 and 1917 and it is 60 by 55 centimetres so is quite small. The female figure is composed in an unusally lively expressionistic style. The gallery acquired it in 1925. (en.m.wikipedia.org)

Our Caroline spotted an article announcing that the painting discovered in the wall behind the ivy (back in December 2019) is definitely the missing Portrait of a Lady and a genuine Klimt.

"It's with no small emotion that I can tell you the work is authentic," Piacenza Prosecutor Ornella Chicca told reporters Friday while two police officers stood on either side of an easel bearing the recovered painting.

Follow this link to read the article - Portrait found in gallery's walls verified as missing Klimt.

But like all good mysteries there is much more to this story even apart from who stole the painting and did it ever leave the gallery or was it behind the wall for 22 years.

In 1996 a sharp eyed art student, Claudia Maga, noticed a strong resemblance between this painting of a Portrait of a Lady and another Klimt painting of a young lady that had not been seen since 1912. (bbc.com)

"The Young Lady had a scarf and a hat but they both had in common the same glance over the left shoulder, the same smile and the same beauty spot on the left cheek", Maga says. (bbc.com)

Further research revealed a great surprise. Underneath the Portrait of a Lady was another Klimt painting - the only "double portrait" Klimt painted. 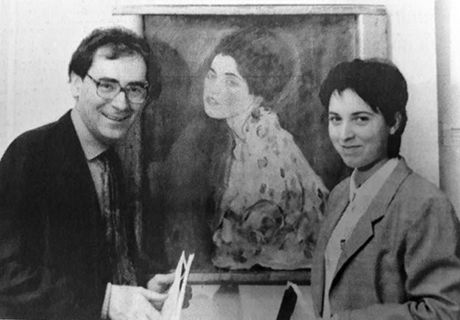 Stefano Fugazza with Claudia Maga and the Portrait of a Lady before the theft (bbc.com)

So why did Klimt paint over the original portrait of a young lady? Sadly the reason is that:

Klimt had fallen madly in love with a young girl from Vienna, it was said, who had quickly become his muse. Then, when she suddenly died, he painted over her portrait to forget the pain of his loss. (bbc.com)

And here is an image of the original painting. Modern technology has allowed us to see the girl that Gustav Klimt loved.

Portrait of a Lady with Hat and Scarf (bbc.com)

Follow this link if you would like to read more about the intriging story of the two works featuring a Portrait of a Lady.

Taking you on a journey around the garden and art works created by Bruno Torfs in Marysville- destroyed in Black Saturdeay fires and rebuilt to be even more inspiring.