Today we shall stop for a few minutes to recall the 75th anniversary of the end of World War 2, on this day, 15th of August, in 1945, when Japan surrendered to the Allies. That day is known as VP Day in Australia, (“Victory in the Pacific”), but more commonly as VJ Day (“Victory over Japan”) in The United States, New Zealand, Canada and Europe. (Images courtesy of Wikipedia unless otherwise stated.)

Celebrations in Australia were quite subdued at the end of the war in Europe, which had occurred earlier, on 8th of May 1945. At that time, many Australian, New Zealand, US and Canadian troops were still fully occupied with the war in the Pacific, and people were very worried about loved ones still involved in fighting, pronounced missing or being held as prisoners.

However, when the Japanese surrender finally came, there was much celebration in the streets of Australia and the US, as well as in Europe.

John Pickup, OAM, one of the Brushmen of the Bush, whose illustrious career we have featured in a previous blog remembers the day very well, even though he was just a schoolboy at the time.

John says: “We were having a lesson at school in Sydney when we heard a big commotion going on outside. The teacher sent me out to find out what was going on. Someone yelled "the war is over! and I raced back inside, and said "The war's over, Sir!" I was nearly trampled in the rush of everyone running outside!

I caught the tram down to Martin Place, in the centre of Sydney city, where there were masses of people shouting, singing and dancing in conga lines. People in the offices above were tearing up any paper they could find and throwing it out of the windows, it was falling like snow! The crowds continued to grow and all this went on for hours and hours!

Eventually I caught the ferry home and told my mother all about it. There was a long pause, and I will never forget the expression of sadness on her face as she said, "Well, I hope you'll never have to see anything like that again”.

It is wonderful to have John's first hand account of the celebrations!

And a special thank you to our fellow blogger, Jane, who has provided me with a link to a special web page on VP Day, set up by the Victorian branch of the Returned & Services League (the RSL) for the 75th Anniversary. There is a wonderful booklet of personal stories, as well as details of an online commemoration being held at 11.20 am Melbourne time on Saturday, 15th of August 2020. Click here.

It is undeniable that Japan committed many inhuman, terrible atrocities throughout the war, which will never, ever be forgotten.

But it is also important to reflect on the huge price paid by Japan, which had fought on, despite heavy losses and defeats in the final two years of the war. For example, the military and civilian losses of Japan were five or six times those of the United States. This was because it was, quite simply, unthinkable for Japan to surrender. It had never been successfully invaded or lost a war in its whole history. In fact, under its ideology of honour at any cost in striving for imperial objectives, surrender was forbidden.

So the terms of surrender proposed by the Allies were rejected, and the atomic bombs were dropped on Hiroshima and Nagaski, despite dire warnings of destruction by US President Truman - "the like of which has never been seen before."

Emperor Hirohito spoke to his people in a general public broadcast for the first time, a few days later, to explain the reasons for the surrender. This was the only time his subjects had ever heard his voice. In his four minute speech he said: "To strive for the common prosperity and happiness of all nations, as well as the security and wellbeing of our subjects, is the solemn obligation which has been handed down by our imperial ancestors and which lies close to our heart."

This was a complete turnaround in the centuries-old philosophy of Japan. But his words, as their divine monarch, "the literally living embodiment of Japan past and present, a paradigm of moral excellence,”1 helped the people to accept this complete reversal, and to replace the imperial ideology of war with an ideology of peace that persists to this day.

This commitment to never again wage war is now embodied in Japan's constitution. Their desire and commitment to fostering peace is marked by a number of very moving tributes and memorials at the Peace Park in Hiroshima.

I was privileged to visit the Museum and Peace Park in July 2015, and here are some of my own photos. I was struck by the atmosphere of peace and tranquillity that pervaded the whole area.

The Peace Flame – lit in 1964 and is pledged to remain lit until the eradication of nuclear weapons.

The A-bomb Dome, the Genbaku building, preserved as it was left after the bombing, as a reminder of human tragedy and suffering, and is now a heritage listed site.

The Memorial Peace Museum – a very confronting exhibition of artifacts and re-created scenes, a stark reminder of the devastation, and suffering of the victims then, and for many, many years afterwards.

The Peace Bells - There are three Peace Bells in the Peace Park. The most well-known bell stands near the Children's Peace Monument and visitors are encouraged to ring it for world peace. Loud and melodious tolling of this bell can be heard regularly throughout the Peace Park.
The Memorial Hall– a round building gently curving down into the ground, to the Hall of Remembrance. It recreates a view of the A-bombed city seen from ground zero. It is simple space in which visitors can quietly pay tribute to the A-bomb victims and contemplate peace.
The Cenotaph - Near the centre of the park is a concrete, saddle-shaped monument that covers a cenotaph holding the names of all of the people killed by the bomb. The monument is aligned to frame the Peace Flame and the A-Bomb Dome, and is shaped as a shelter for the souls of the victims. A pond of peaceful water encircles it.

The Children’s Peace Monument - a statue dedicated to the memory of the children who died as a result of the bombing. The statue is of a girl with outstretched arms with a folded paper crane rising above her. The statue is based on the true story of Sadako Sasaki, a young girl who died from radiation from the bomb, who folded over 1,000 cranes (water birds) before she died. To this day, people (mostly children) from around the world fold paper cranes and send them to Hiroshima where they are placed near the statue.

We remember the great losses and sacrifices of all countries and people involved in all wars. We hope and pray for the tolerance and acceptance to enable all governments to work together for the betterment, harmony and equality of all humankind.

In the commemorations held in Hiroshima on the 6th of August 2020, for the 75th anniversary, Prime Minister Shinzo Abe re-iterated the commitment of Japan to peace and their continuing work with NATO and other world bodies to promote that objective. 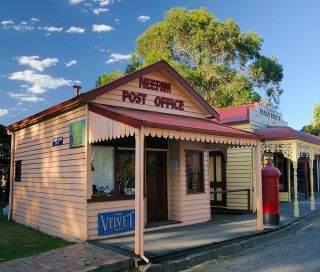 In the second mailbag for August we bring you a newly discovered Australian painter - Clarrie Cox; some painted ceramics from Bendigo and a Holyland museum from Los Angeles. Image: visitvictoria.com.au