Most people interested in art know of the works created by Sir Henry Moore. Here in Melbourne (Australia) we have several works by Henry Moore in our National Gallery, Victoria the most well known being the Drapped Seated Woman. 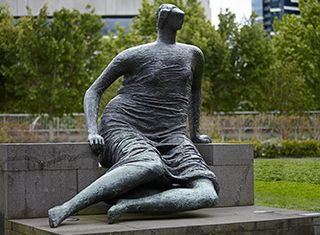 The National Gallery Victoria contains some wonderful sketches by Moore and some smaller statues.

The day I spent at the Tate Britain drooling over the Frank Bowling paintings I did take time to pay homage to Henry Moore. 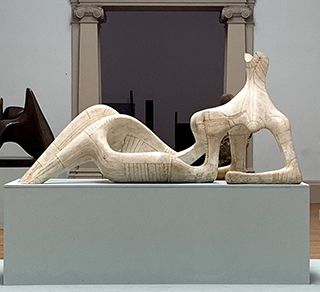 In Frank Bowling: Part One I showed you a painting that Bowling had created as a homage to the British sculptor Anthony Alfred Caro who played a significant role in the development of C20th sculpture.

These words were written by Anthony Caro in his article The Master Sculptor in The Observer in 1960. Caro went on to say:

Alan Shipway has taken up the critique in About Caro where he states:

Sir Anthony Alfred Caro OM CBE (1924-2013) was an English abstract sculptor whose work is characterised by assemblages of metal using 'found' industrial objects. His style was of the modernist school, having worked with Henry Moore early in his career. He was lauded as the greatest British sculptor of his generation. (Wikipedia)

Caro's breakthrough exhibition at the Whitechapel Gallery in 1963 presented brightly painted, abstract steel sculptures displayed without plinths, directly on the floor. One of my favourite Caro sculptures is Garland as shown below.

Apart from his large sculptures, many that stand without a plinth, Caro has these delightful smaller pieces that sit on a ledge or are often called a table piece. I particularly like these as they do present a different style of creative design.

And now enjoy a little trip past some more Caro Sculptures.

Caro was 89 when he died of a heart attack on 23 October 2013. He was lauded as a "gentle man with a pioneering spirit" by BBC arts editor Will Gompertz and "one of the greatest sculptors in the second half of the twentieth century" by Royal Academy of Arts chief executive Charles Saumarez Smith. (Wikipedia)

The Frieze Masters exhibition is held in an enormous temporary building in Regents Park. Thinking of Regents Park reminded me it was time for a Day of Reflection.